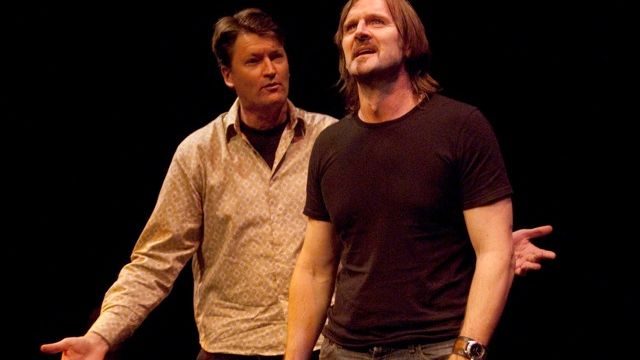 I've reviewed impro theatre in these pages before, but I'd never seen a "longform" improvisation until this week, when I attended an evening containing two such in a week-long impro festival, and they opened my eyes to something beyond the quick-wittedness that is trained into impro performers.

The first performance was a "Show From Nothing".  Close questioning of performers and of director Nick Byrne established that literally nothing is arranged before the director gives an opening cue (in this case, merely the presence on stage of a chair): no characters, no relationships, no set players in any scene.  Naturally, you'd consider that it would be difficult for any story to emerge from this dearth of all structure; yet the weaving of interspersed scenes into a single, genuinely comic, narrative was masterful.  It's difficult to believe what this set of seven players and a musician achieved through pure invention.

Nick Byrne described the chief requisite for success in the form as authenticity: responding without censorship.  And the training in responding authentically showed.  There was not a dropped beat to suggest that anybody had to think before acting.  The experience is said to be very liberating of the performer, but we in the audience too understand that every twitch is genuine, and it makes every one of them all the funnier.

The second performance, "Inspired by Strindberg", was a more serious affair, either because that's what a member of the audience asked for—sadness—or because that's just the nature of a piece whose players know they want to convey the essence of a play by Swedish playwright Strindberg.

This one did have preparation of sorts: a three-hour workshop on the day of the performance (Thursday), in what makes a Strindberg play.  And certain things were specified beforehand: the setting, a Swedish farmhouse circa 1900; some Swedish character names (but not roles).  But it too began otherwise without guidance, and simply unfolded from the opening actor's first action.

The result was amazing: utterly convincing, expertly plotted, and moving; and yet unplanned.  For utter mastery in convincing acting on the spur of the moment, I have to take my hat off to Nick Byrne (Canberra), Jenny Lovell (Melbourne), Cathy Hagarty (Canberra again), and Felipe Ortiz (Bogotá).

In this performance, Nick Byrne was the opening actor and created a strong character simply in the way in which he held himself as he gripped a chair.  As the piece progressed, two things did help seat the actors: a truly musical accompaniment by Kettil Medelius (all the way from Stockholm, on keyboard) and Tristen Parr (from Perth, on electric cello), and half a dozen directions, for the audience to hear as well, to one performer or another by its director, Per Gottfredsson, the direction usually being to monologue upon something.

Per Gottfredsson, himself a Swedish legend, normally works with the Stockholm Improvisation Theatre.  Brought out to Australia specially for the festival, along with several other leading international impro lights, he was highly spoken of by the actors he'd worked with, to whom he communicated how a Strindberg play works.  In a few words, it builds tension till something breaks; and break it did, inconsolably. Saturday in the week-long Improvention 2011 Performance Showcase had Australian and international impro stars throw together three performances, each 3/4 hour, all very different.  The Conversation, an interview between Cale Bain, Libby Klysz, and Swedish director Per Gottfredsson, was interrupted several times for improvised performance relating to its topics.  As I'm finding common in impro theatre, the results were hilarious, embellishing tales of Cale's "sex doctor" father and Libby's experiences on a Dept of Health information line largely answering questions that related to concerns about sexually transmitted diseases.

The Wishing Tree enacted eight randomly selected wishes that audience members had hung on a tree.  One performer selecting the wish and cueing fellow actors to begin, what followed was a spontaneous fulfilment of that wish.  Many of these stories were surprisingly moving.  Interestingly, as they had superbly in Show From Nothing two nights earlier, the performers cleverly linked many of these tales together toward the end of the process.

Finally, What Would Shakespeare Do set the bard to write, on the hoof, old- and new-style responses to modern-day conundrums using some semblance of Renaissance language.  The tongue twists that resulted only heightened the fun of hearing many speeches, on topics from finding love to fighting the Gillard carbon scheme, delivered fluently, with Melbourne's Rik Brown providing particularly credible neoShakespearean.