Inspector Drake and the Black Widow 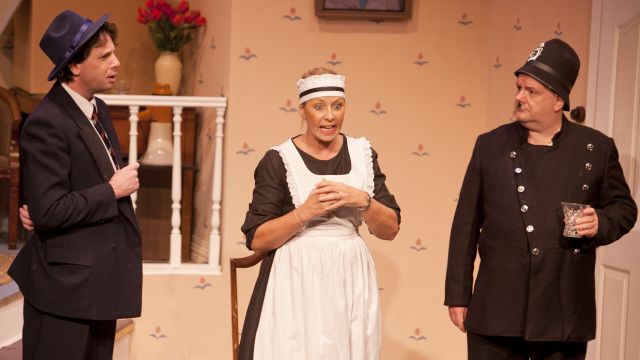 David Tristram is a very funny English playwright who specialises in creating hysterically funny plays mostly for community theatres. They have small casts, one set, and generally make fun of “Am-Dram” itself – with subject matter sending up detective genres and popular cultures like soap operas. He is the perfect choice for 1812’s start to 2014.

Experienced director Anne Simmons clearly has a ball with the play and her cast. Tristram writes most of his comedy business into the script itself, but Simmons and cast realise it beautifully.

The plot, set in the 1930s, is slim, just enough to hang the gags on. Sergeant Plod sends for the infamous Inspector Drake to help solve the murder of John Johnson (unseen)…who has been stabbed in the back whilst wearing a dress. The two are thwarted by a series of women who look suspiciously alike and soon Inspector Drake finds himself targeted as the next victim. Add to this an escaped Black Widow Spider, and that’s pretty much all you need to know.

1812 always casts meticulously and this is no exception. Mike Roberts (Sergeant Plod) has had years of professional experience in areas where talking to the audience directly is part of the process, and he does it brilliantly. His style of comedy is naturalistic and laid back and perfect for the monologues directly to the audience. When he started to explain that his pet Black Widow had escaped and warned us all of the symptoms (like our insides turning to soup) I saw several people shudder as they laughed. It’s Roberts who holds the play together, who leads us through the plot holes and who reduces us to tears of laughter with comedy that takes us through trapdoors and up into secret rooms through sofa beds. His timing is impeccable.

Brett Hyland is terrific as the flamboyant and inept Inspector Drake. This is the third time I’ve reviewed Hyland’s work, and he just keeps getting better. He relishes every piece of business and makes it believable in context. His style of acting is much more in keeping with the 1930s setting, and yet it complements Roberts’ low-key delivery perfectly.

Pip Le Blond, a pillar of 1812, has the unenviable task of playing EIGHT characters, one of them a man disguised as a woman. It’s a huge ask for any actress, and some work better than others. She excels as the Maid, Dr Foster and the Zoo lady, finding all the best comic moments.

These three make a feast out of Tristram’s slice of comedy, and the audience ate it with relish. The excellent cast of this madcap romp all suffered first night jitters in the second act, with the closing song all but disintegrating, but somehow that only added to the mayhem and mirth of this hilarious production, 1812’s first season for the year.

The roughness around the edges simply gave us more flavour. Add to this 1812’s generous tradition of pre-show drinks, a free programme, and a delightful champagne supper, and this has to be the best value for a night’s entertainment in the outer suburbs.