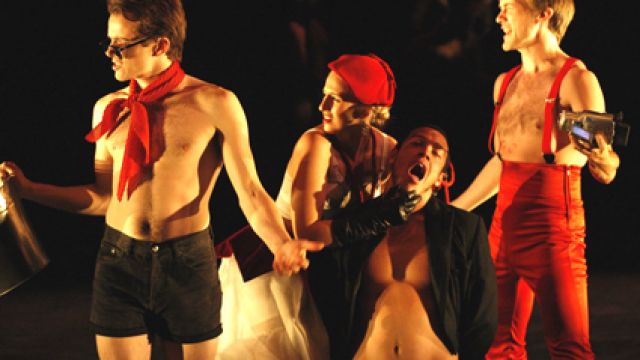 To showcase a graduating class, especially one as varied, talented and large as VCA’s Acting Company 2009, is no mean feat. Tanya Gerstle has more than successfully achieved this through the ambitious production Invisible Stains, a collaborative creation around twentieth century trauma.

It is a complex feast of tableaux, vignettes and short scenes framed by a gentle instrumental version of She’s Buying a Stairway to Heaven, threaded together, initially, by flowing transitions of hedonistic partying. Subsequently the weft and weave of scene changes become aspects of other scenes then finally merge to characters and actors just moving through space. Throughout the always engaging, never tedious, though long, hour and forty-five minutes – music enhances, props and set are kept to a minimum and performers display exemplary ensemble skills. It is a casting agent’s Utopia and a Senior Drama Teacher’s treasure trove rich with characterisation and transformation.

Although the swift flow of the whole often limits opportunity for cathartic contemplation, the piece contains strongly affecting scenes played with intense clarity. Particularly moving is the mourning aboriginal mother; deeply disturbing are the drug using, disaffected soldiers; and the ‘friends to lovers’ tourist scene is delightfully authentic. The contrasting revelry from varying nightclubs and parties provides, at times, a shallow superficial backdrop, and at others, the depth and intensity of the messiness that can be partying.

If anything the overall energy feels a little constrained but it is beautifully balanced. Some voices could benefit from more focused projection and, at times, the work could be lit more vibrantly to support the acting. However the whole is thoroughly engaging and enjoyable from the initial management of the audience as refugees to the reveal of the students as themselves. It is certainly a testament to the ensemble and teaching staff’s imagination, talent and skill that the students' own work can be workshopped, moulded, and melded into such a rich offering.