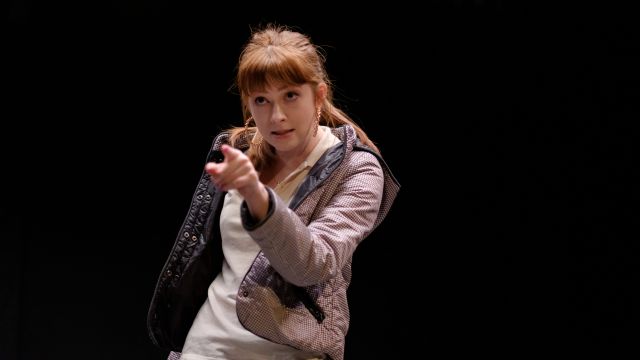 Meg Clarke doesn’t have to worry about social distancing in this performance. She’s the only one on the stage – for over 80 minutes. It’s a difficult script, word and emotion heavy, in which her character, Effie, talks the audience through a time she wants them to understand - acutely. Skilfully she draws them into her story, making them laugh at times, shocking them at others, seeking their empathy, but never letting them get too close. There’s a reason she’s got them together and she’ll draw them in until she’s ready to tell them why!

Welsh playwright Gary Owen has set the play in his hometown of Splott, a suburb in south Cardiff. In fact, Effie lives in the street where Owen himself used to live – and he makes the Splott of today an intricate part of her story. Gone are the old farms. Gone are the steelworks that provided employment for so many. Effie describes a suburb of high-rise flats, vacant shops, a burnt out bingo hall. Life obviously isn’t easy – and Owen’s short, pithy descriptions set a graphic scene. As do the words he has given to Effie to introduce herself. She describes vivid vodka-fuelled nights, pain-filled three-day-long hangovers – often paid for with money she accepts from her seventy-year-old “Nan” who works shifts in the supermarket. Until something changes … and Owen leaves that to Effie to explain in a series of carefully interwoven scenes that lead to an unexpected conclusion.

Meg Clarke epitomises the Effie that Owen’s words suggest. She makes her brash, street-wise, but innately intelligent. She does it through her walk, her stance, a shrug of the shoulders, a graphic gesture. She does it in her voice, her carefully rehearsed Welsh accent that heightens her colourful language, her bitter experiences, her telling throwaway lines. Clarke uses carefully judged pauses to emphasise effect –  to shock, or relieve, or to re-engage. She, and director Lucy Clements, know Effie intimately. Together, it seems, they have deliberated over every phrase, every punctuation mark, every implication and every turn of direction of this intricate script. And Clements has used a minimalist set and judiciously defined blocking to accentuate its impact. Three stepped platforms take Effie to the highs and lows of her story. She crouches or leans against a wall to reflect – or walks close to the audience to make a point.

Lighting (Jack Saltmiras and James Smithers) subtly enhances her changes of mood. Chrysoulla Markoulli matches this with a sound design that emphasises the shadowy places Effie inhabits – though the opening sound effects were really unnecessarily long.

Clarke and Clements have developed a gripping production. Though long for a one-hander, the audience is kept absorbed – so much so that the final words of the play are certainly a surprise. Clements says in her director’s notes that once staging a play in 2020 was again possible, she knew that she “needed a show that was strategic, powerful, current, and could be adapted as both an in-person and on-line experience”. Iphigenia in Splott is a perfect choice. Tickets for the on-line performance can be purchased at: https://events.humantix.com/iphigenia-in-splott.

Whilst the company has a QR code, and hand sanitising equipment, and mark their seating to provide social distancing, there is need to be careful of social distancing in the foyer. Fortunately on a fine night, patrons can wait outside until the auditorium is opened.