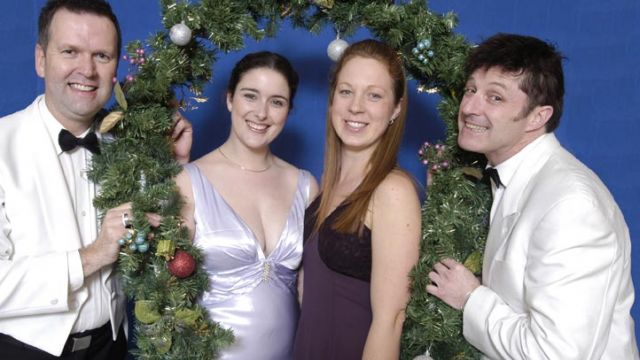 MLOC Productions excelled themselves with the Victorian Premiere with Irving Berlin’s White Christmas, based on the film with Danny Kaye, Bing Crosby, Vera Ellen and Rosemary Clooney, with some small changes to suit the stage.
The sets, fairly basic, changed easily and efficiently to give the correct feel to the various scenes. The orchestra, at the rear of the stage, did not compete with the singers - ie one could actually hear the voices.
Peter Phillips as Bob Wallace, the somewhat bemused showman whose friend was trying to marry him off, had superb voice and gave a professional performance. Rowena Brown has a lovely stage presence and shared a good rapport with Phillips, as Betty Haines, one of a sister act (the young lady being matched to him). Brown’s voice also added to the high standard of the evening. Wallace’s friend and partner was Phil Davis, played by John Davidson, a great performer and has a good sense of the comique. Kate Knight played the other sister, Judy Haines, who, with Phil Davis, was working hard to pair her sister off. Knight captured the essence of the character who thinks she knows best as to what her sister wants. A good voice and a professional performance.
Simon Fitzgerald as General Waverley, the boys’ old army General whose hotel in Vermont was losing money, caught the military feel his character and had a good stage presence. As his housekeeper come receptionist Martha Watson, Sally Fleming gave a wonderful comic performance. Olivia Seerup, a young performer, gave a professional performance as the General’s granddaughter Susan Waverley. She has a good voice and a promising future on stage.
Clare Zielinski and Michelle Carlin played Rhoda and Rita, two comic characters trying to get on with Bob Wallace. Both caught the characters with aplomb and added to the amusement of the evening.
A large cast with a fine overall performance, which was enjoyed by the audience.
Peter Kemp

White Christmas plays a return season at the Phoenix Theatre, Elwood from December 18 - 20.