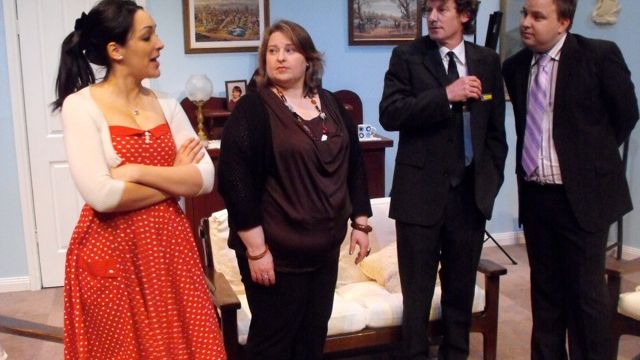 Ron Patterson calls his family together in Elizabeth Coleman’s It’s My Party (and I’ll die if I want to) to tell them he has been told by his doctor that he has only a couple of hours to live.

Chris Hudson captured the pedantic Ron who still expected his adult children to go the way he wanted regardless. His wife Dawn was played by Susan Carty, called in at the last minute as Liz Matthews had to pull out due to an accident. Carty carried the role well, acted the part perfectly and although carrying the script did not appear to the audience to even look at it. At the end of the show the remainder of the cast gave her a rousing reception.

Tyson White gave a fine performance as the businessman son who could not forget business no matter what. He had a secret which only his sister Debbie shared and he was not game to tell his father. His sister Debbie, given a great portrayal by Emma Barber, also had a secret and again was not about to admit it.

The other daughter, Karen played by Jessica Fernando, was Daddy’s pet, a complete spoiled brat. Fernando really getting to the heart of the character, making the audience feel they would like to put her across their knees.

A later entry into the household was the Funeral Director Ted Wilkins, played by Lyen Rouillon. The scene with Ted was a delight and added to the sense of the play. Rouillon gave a great performance, looking thoroughly confused as his view of Ron differed in every way possible from the family’s view.

An amusing play, well presented by the Sherbrooke Theatre Company.