This Is It - Team Mess 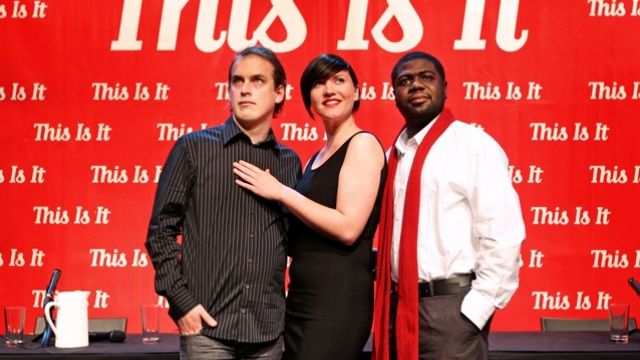 Invited to a press conference for a new film 'This Is It' and surrounded by journalists recognisable from similar press events, this felt like the real thing.

Team Mess, a Sydney based performing collective, use the format of the press conference to construct a presumed narrative of the film, The audience questions and imput mean that a different show (and unseen film) are created each performance.

On opening night, the large proportion of journalists led to some beautifully constructed questions and a bit of a head-spin as to who, where and what was real or created, as Team Mess examined the 'pretences of representation'.

The West Australian newspaper's film reviewer, Mark Naglazus hosted the event. Notably nervous (or beautifully acted) his confidence grew throughout the presentation and his referral to notes and genuine stumbles over actor and character names added to the production. A genuinely likeable presenter, he was an asset to the production.

Handed a press kit rather than a programme, it is difficult to review this conventionally. The film actors named in the film publicity and appearing at the conference are Malcolm Whittaker, Natalie Kate Randall and Frank B. Mainoo - while offstage and off camera are director Dara Gill and writer Sime Knezevic.

Working tightly as an ensemble, they bounce off each other beautifully and complement each others' performances well.

This is an intriguing production, a wonderful mind bender that holds close but questions its very nature.