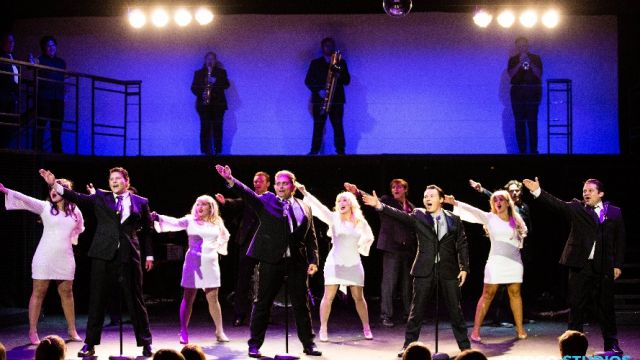 Jersey Boys is a feast of fabulous music, well-presented, which is the hallmark of Spotlight’s numerous productions.

It’s the story of Frankie Valli and the Four Seasons’ rise to the pinnacle of popular music as told through the eyes of the various members of the group and their entourage - who tell it warts and all - with much coarse language thrown in for good measure!

In the role of Frankie, Bryn Jenke is brilliant – a triple threat with good looks! He has a wonderful voice which he uses to recreate the Valli sound. He is well supported by Clay English as the thuggish Tommy De Vito, Brad Kendrick as the downtrodden Nic Massi, who has lived in De Vito’s shadow all his life and Mitch Walsh as Bob Gaudio, the fourth member of the group and the inspiration of their musical success. They are supported by a talented cast of minor principals, everyone giving of their best.

Co-Directors Scott and Kendrick have bought to life the seedy world in which the boys lived in New Jersey, in and out of prison and their encounters which loan sharks and less savoury underworld types. Paula Guild’s choreography adds to the energy of the production.

The basic multi-purpose set, with a number of performance areas, is put to good use and enhanced by the usual high standard of audio and technical effects.

Under the baton of Matt Pearson, the orchestra is at the back of the set, in view of the audience with several of the brass players also appearing on stage.

For all Frankie Valli and The Four Seasons fans, this is a fantastic tribute to a group who struggled their way to the top of the music industry.