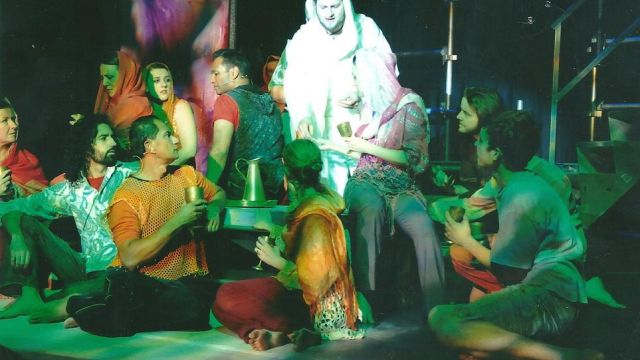 Did you first experience Jesus Christ Superstar in the 1970s as a rock concept album or a large-scale, spectacular rock opera? Surprisingly, Rajah Selvarajahas’s interpretation of Judas is physically and emotionally restrained, while his voice is more musical theatre than the driving rock sound usually associated with the role.

Particularly effective among the ensemble numbers are Hosanna, with its use of wave cloths, and the scene where Jesus is confronted by the beggars and cripples. The scene in the temple, however, needed more dramatization to its choreography. Attractive costuming gives the production a distinctly hippy 1960s feel.

The hanging of Judas was not convincing. Despite restrictive stage facilities, surely something more inventive was possible. The crucifixion, using a cross, present throughout the show though unobserved, emerging from the scaffolding, was, by contrast, quite striking.

Alan Steadman’s orchestra, off to one side of the auditorium, effectively recaptures the score’s familiar instrumentals. Mid-auditorium, what you sense may have been a challenging sound balance, works effectively.