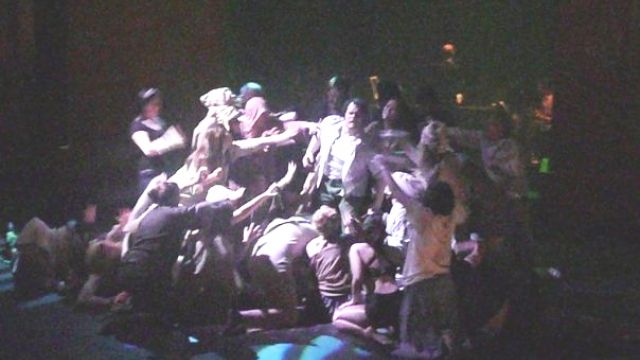 The Old Scotch Collegians Association chose Jesus Christ Superstar for their second production; quite a change from Les Miserables. This was given a modern setting with Gestapo police and abstract sets which were very effective.

Gerard Schneider played the lead character of Jesus with great dignity, but his operatic tenor didn’t always know how to handle the rock music. Rock singer Jamie Pearce as Judas was much more comfortable in this medium and was vocally thrilling.

Mary Magdalen was played convincingly by Georgia Brooks, but the find of the night was operatic baritone Andrea Carcassi as Pilate. A big man with a big voice, he dominated the stage. Phil Elphinstone and David Schloeffel were effective as Caiaphas and Herod, while Daniel Mottau and Paul James were very enthusiastic as Peter and Simon.

There was a big well-trained chorus which was kept busy, always adding to the tension and singing as one. The sets and direction worked well and though the costumes were a bit of a mixture, they added to the drama.

An exciting night at the theatre.