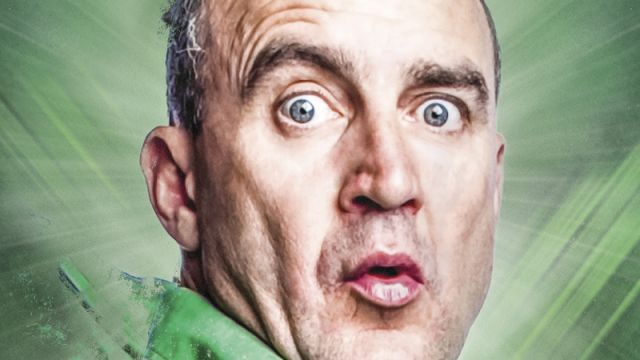 Jimeoin will be well known to most Fringe-goers as that cheeky Irish comedian who’s graced our stand-up comedy stages for over a quarter of a century. Many of us have laughed all the way to middle age with him, but for the younger audience members he’s equally as well-known, but as that funny Irish guy seen on The Project and television comedy galas.

This show appeals to all ages as JImeoin discusses and ridicules the trials of life. His ability to flit from one subject to another, all whilst interacting with the audience, takes us on some kind of ridiculously funny journey.

He begins with observations of religion from Catholicism to Scientology.  Jimoeoin is Catholicish, in the same way you might be Jewish. He does quite a convincing impersonation of David Attenborough whilst talking about his BBC programme ‘Life’. From there he moves onto those middle-age comedy staples, marriage, and aging.

A brief cameo from the Flinders technician and his guitar was set up. He then unleashed his song-writing talent on the unsuspecting audience. With songs such as ‘Balls Deep’, and ‘Quick Love’ the scene was set. His musical talents really came to the fore with  ‘Howard’, a wordless song about his drunk father who supposedly commented during one drunken episode that he’d only had two pints, to which Jimeoin replied, “two pints of whiskey”.

Having only recently returned from a sell-out tour of the UK he was suffering a bit from the dreaded jet lag, not that it was noticeable. But he did comment at one point that he wasn’t sure he’d get through the whole show as he kept being distracted. Of course, being Jimeoin he had a lovely solution - that he would collect everyone’s mobile numbers so he could call us and tell us the rest of the show. I think we all secretly wished he would.

A special mention must go to Jimeoin’s surprise support act, simply adored by the audience. British born, local-living emergency department nurse Georgie Carroll had everyone in stitches within minutes. From her experiences at an (almost) un-named Adelaide hospital, to stories as a child growing up in England, to marriage and motherhood. What overworked mother can’t relate to those awkward meetings with the active wear clad, Thermomix-selling mothers with gifted children that we come across at primary school?

This was Jimeoin’s only appearance at this year’s Adelaide Fringe, however, Nurse Georgie Carroll can be seen nightly in her show The Gloves are Off at Gluttony.