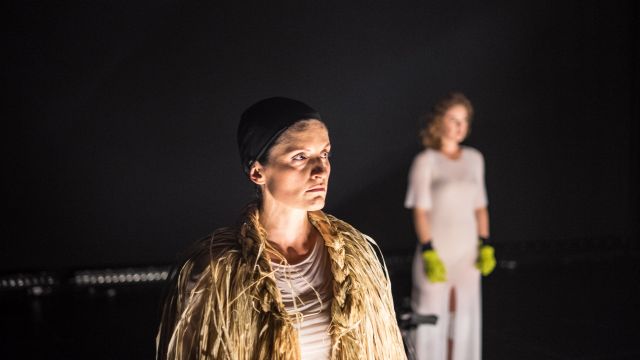 Opening with extraordinary multi-media projections on scrims, Joan by The Rabble, is a work of high art.  It is riveting, hypnotic, haunting and sometimes deeply shocking. But at all times uncompromisingly designed to insightfully explore a deep feminist response to the now canonized, illiterate peasant, who was ‘the virgin from Orleans.’ Joan of Arc who, in The Middle Ages, led the French into battle with the English, who ultimately burned her at the stake thrice, is the subject of this production.

Here her story is stripped back to its powerful and profound essence by a courageous affiliation of theatre makers who have previously brought us similarly weighty works such as The Story of O (2013) and Salome (2008).

I strongly advise before seeing this show you read up on Joan of Arc to be able to augment this astonishing ‘black and white’ offering with one’s own understandings, insights and colourful nuances. Costumes by Kate Davis have the capacity to morph suggestively from military uniform to flowing dresses to projection screens of sorts.

Encapsulated here are Joan’s strengths of huge courage and dogged determination, along with her humiliation at the very private becoming excruciatingly public, then her torture and horrific demise.

As a mostly image based work, when text is finally spoken it is acutely and intensely visceral.  All four performers excel in affecting the audience with words but most particularly Nikki Sheils with Emma Valente’s sharp acute text.

It feels like a privilege and honour to be able to attend theatre of this caliber.