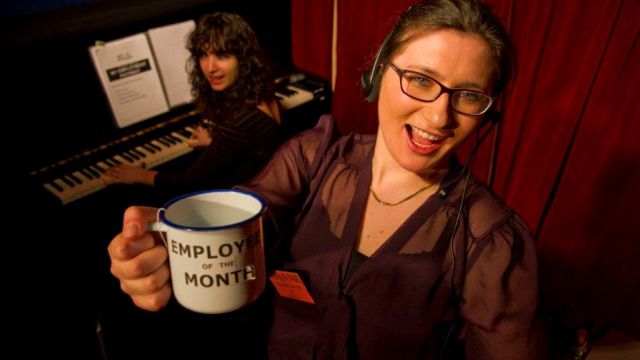 Joanne (Taylor Klas) is a polyester-clad woman with a sharp tongue and withering stare behind her glasses, a public servant with seemingly no compassion for the down-at-heel clients she is meant to be helping. Through songs and stories in this clever cabaret there emerges a woman who has sacrificed dreams out of a fear of one day finding herself on the wrong side of her Centrelink desk.

Directed by Petra Glieson, Klas and pianist/co-singer Hanna Silver perform a funny, well-constructed cabaret with songs that capture the frustrations, and sadness, of life inside our national employment agency.

Joanne is quick to judge her clients, many of whom try to squeeze as much money out of the government as they can. Joanne is ruthless with them when it comes to making sure they have filled out the proper forms and provided the correct ID. Anyone who hasn’t is sent home, or to the back of the queue to start all over again.

But Joanne is not above trying to bend the rules herself, especially when it comes to her son. In one of the show’s funniest songs, she tells of her son stuck at home with video games, completely uninterested in his education or getting a job. There’s even some shadowy things Joanne is trying to do on the computer, to get her son out of some sort of mess he’s gotten into.

As Joanne is a dominating presence, especially with Klas’s powerful singing voice, it is a nice contrast when she sings along with Hanna Silver. A highlight of the show is a song about the pursuit of dreams, with the two women singing from different perspectives. The world would fall apart at the seams if we all pursued our dreams, according to Joanne, but it’s not the view of the artistic character played by Silver.

A great comic performance from Klas and catchy songs make this a fun cabaret.