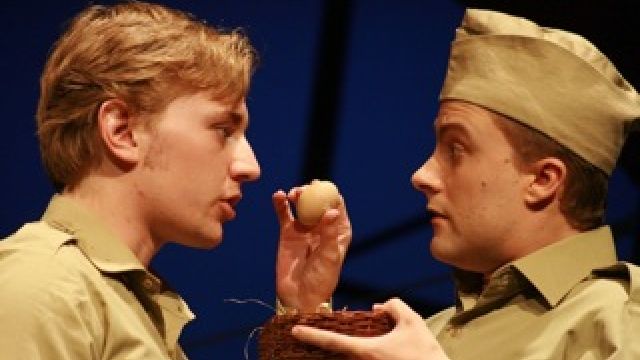 What a joy to catch up with an inspired stage production of this 1960s literary classic!
It’s a devilishly difficult play to bring off, but with an ingenious set, a committed cast (all but one of whom played multiple roles) and Gregory Rowbotham’s masterful direction, this team succeeded in spades.
The WW2 flight squadron of crazies portrays an uncomfortable parallel with events in more recent US wars. Seems you don’t have to be mentally unstable to go to war, but it helps.
The sane and morally strong Yossarian (James Gauci) provided an anchor of sanity in the seas of bureaucratic absurdity.
Particularly effective also were Damien Campagnolo as Colonel Cathcart, who obsessed about the number of feathers in his cap – literally; Alex Lanham’s hypochondriac Doc Daneeka; and Dan Beeston as the meek and well-meaning Chaplain whom the Lord seemed to have forsaken.
To be fair, there wasn’t a weak link in this cast (9M, 2F) and they were well supported by the creative team.
Like most good satirical comedies, it grew darker as the play progressed. If the ending seemed somewhat protracted, it revealed Heller’s real clout: The brutality and horror of war; that the real enemy is often within; that life in wartime is a paradox; and that bad men are more likely to get ahead, rise in rank and make more money.
Jay McKee