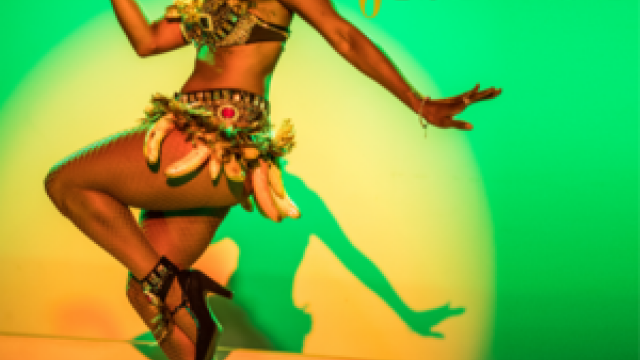 Josephine Baker had a hit with “J’ai deux amours, (mon pays et Paris)” in France. It says a lot about how this dancer, chanteuse and cause célèbre felt about her place in the world. Born in St. Louis in 1906, Baker arrived in Paris in 1925 to appear in La Revue Nègre.  As the song goes, she had two loves, her country of birth, where she continued to be subject to segregation and suppression based on the colour of her skin, and Paris where she was adored and celebrated for it as the “The Bronze Pearl”, “The Creole Goddess”. Appropriate then that multi award-winning Josephine at the Black Box Theatre should open with this number. It sets the scene for a 75-minute précis of Baker’s life.

Co-creators Tymisha Harris (also Performer/Choreographer/Costume Designer), Michael Marinaccio (Director/Producer) and Tod Kimbro (Writer / Musical Director) have breathed new life into Josephine Baker. They bring the story of the original mistress of self-reinvention to a new generation.  While some will have heard of Baker’s place in the “Lost Generation” many will not be aware of the trailblazer that she was in so many other ways. In 1963 Baker was the only woman to speak at the March on Washington, alongside Martin Luther King. In 1975 she was buried with full French military honours in honour of her work as a spy for the French Resistance.

Tymisha Harris embodies the impulsive Baker; she is a lithe, playful and charismatic performer, a capable singer and an athletic and accomplished dancer. She skilfully takes the audience on a journey from Baker as a determined child, to mature woman, wife, lover, spy, civil rights activist and mother.  Her rendition of the “Danse Sauvage”, the infamous banana dance that shot Baker to fame at the infamous Folies Bergère, is risqué and quirky, much like Baker herself.

The piece cleverly employs a minimalist set comprising a sometimes tantalisingly lit dressing screen plus a simple table and chairs. Harris has designed beautiful, luscious costumes, true to the era and evocative of 1920s Paris. To allow other characters to join the action the team have incorporated the clever use of voice-overs and audience interaction, both of which Harris handles with a cheeky audaciousness.

This is an outstanding and thought-provoking show. A fast-paced, racy yet highly polished, cabaret show with a message that seems just as appropriate now as it would have been in the 1920s.

Harris leaves us with a spine-tingling rendition of Bob Dylan’s “The Times They Are A Changin’”.  It’s a reminder that while intolerance once again seems to be on the rise, we all must fight to be who we are, to have equal rights and to love who we love, free from judgement or suppression. Perhaps we should aspire to be what Baker herself tried to create “A Rainbow Tribe”, living harmoniously.