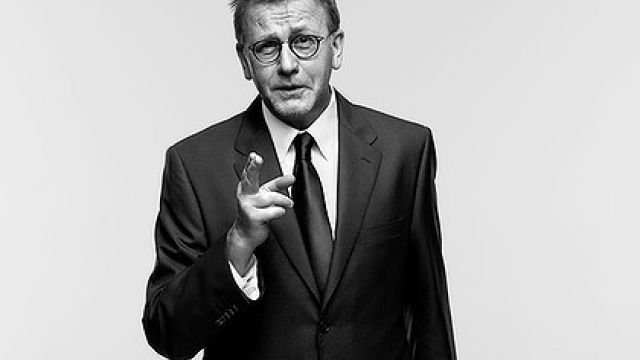 For four months this trimmed down and modernised adaptation of Julius Caesar has toured regional and metropolitan Australia,  to land at the Sydney Opera House with the cast now as sharp as the daggers  they use for the assassination.

Dressed in business suits, with swift movement across the stage, commentary on microphones, a bare set (save for one Roman column) and powder instead of blood, this production takes a little getting used to.

Adding to the slight dislocation of sensibilities Caius Cassius is played by a woman (albeit very skilfully by Kate Mulvany), who sometimes passionately kissed her colleagues.

So when the first dagger was inserted at the end of the first act, the tension had not boiled to a sufficiently high temperature to make complete sense of it.

The second act was more engaging. The choreography of the completion of the murder was swift, stylish and clever.

Speeches at Caesar’s funeral oration, aided by the slight echo on the microphone, began to make the spine tingle.

Although Mark Anthony (played by Daniel Frederiksen) still looked odd with longish hair when he spouted “I come to bury Caesar not praise him” etc., you felt like you were in a grand Roman Amphitheatre.

Alex Menglet was charismatic as Julius Caesar. With his trench coat, he could have been a mafia Godfather or an Italian Prime Minister.

The play ends with Colin Moody as Marcus Brutus describing his bleak future.

In the original Shakespeare makes clear what happens to Caesar’s once close friend.

In this pared down edition, those not familiar with the text had to use their powers of supposition to figure it out.

It was a more satisfying experience for theatregoers re-visiting an old friend than those seeing the play for the first time.