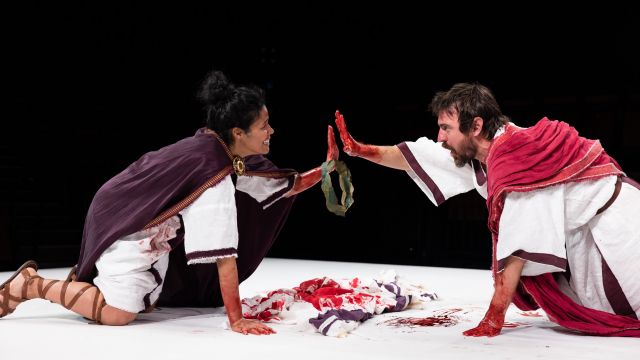 Kip Williams is making the sort of theatre that embraces all the creative possibilities of  twenty-first century technologies and talent. In this Julius Caesar he brings together video, smart phone technology, split second mixing, inventive sound composition and innovative lighting design – and three highly intelligent and experienced actors – in a production that challenges and inspires. That it does so on a very innovative interpretation of ancient Greek theatre-in-the-round is a wry tribute to the long history of theatre. Williams cleverly adapts the five acts of  Shakespeare’s 17th century description of a 44th  BCE century coup against the tyranny of political ambition into to 21st century encapsulation of “the psychology of our time”.  “I was shocked again and again,” he writes, “by the echoes and reflections in this work of an ongoing cycle of power struggle across history.” So shocked, it seems, that he sought, successfully, to weave more recent examples of “those who seek to assert their own self-interested will upon the masses” into his production. He juxtaposes past and present with a cynicism – and humour – that questions the rhetoric and distrust that has been fostered by the same technology that he uses so successfully in this production.

Shakespeare told of Caesar’s assassination in powerful words and strong, memorable characters. Williams’ production honours both – but adds a pace, pressure and passion that is demanding of his cast, his crew – and his audience. It is compelling, breath-taking, cynical – and extraordinary in its ingenious combination of styles and techniques. Geraldine Hakewell, Ewen Leslie and Zahra Newman become the two opposing ‘powers’ at play in Rome on the Ides of March in 44 BCE. Skilfully they introduce their characters, changing smoothly but quite explicitly from one to the other – a different stance, the simple rearrangement of a jacket, the  replacement of a laurel wreath – establishing rank, loyalty and influence whilst pacing across a raised, square stage or following each other around its wide base.

As if this isn’t enough, as they foment the turmoil of rising unrest, they skilfully film each other on smart phones – manipulating the camera to capture close-up expressions of righteous anger or manipulative ambition … or fear. These clear, formidable images appear simultaneously on four screens that form a huge, white, baseless, square prism that hovers above the stage at times, or is lowered slowly onto the stage at others. Filmed and present time sequences merge with on-stage action in an astounding wrap-around multidiscipline theatrical experience. There is no leeway for error in a production that relies so much on the interdependence of actors and technology. It requires meticulous planning, insightful direction and rigorous rehearsal. The final product depends on focused concentration, expeditious timing and complete trust.

On stage, Newman, Leslie and Hakewell illustrate all of this. They are focused, working together with incredible synergy. They imbue the beauty of the language with expressive scorn or persuasion or distrust. The characters they portray bring ancient history and today together in scenes that are intimately close and bloodily blunt. Newman is a forceful, confident presence. She moves with smooth assurance between her characters, but it is as Brutus that she impresses most. The sinuous changes that move her Brutus from loyal friend to murderous foe are carefully manipulated and convincingly portrayed, especially in smart phone close ups where her eyes and voice are tauntingly expressive.

Leslie moves between Caesar and Cassius with studied alacrity – self-possessed as the former, cringeingly corrosive as the latter. Leslie is a consummate performer, whose comic timing is highlighted in a “zoom” meeting as Octavius – and a viciously telling social media clip later in the production. It is through Mark Anthony that Williams merges past and present – and Geraldine Hakewell savours the metamorphosis that his extension of this character affords. Shakespeare’s satirical words drip tauntingly from her tongue as she addresses Rome over Caesar’s body – then become more provocatively mocking as they mutate into more recent examples of political rhetoric. Williams uses the full force of stage and screen theatricality to make his point in this scene – and Hakewell relishes that power.

There is much more to reflect on in this production. It is vibrant, innovative, contemporary. It brings together creatives that work across the arts and technology that inspires new ideas and possibilities. It also brings together the politics of ancient Rome, the lasting words of a 17th century playwright and the imagination and talent of contemporary theatre creatives. Could an audience require more than that?