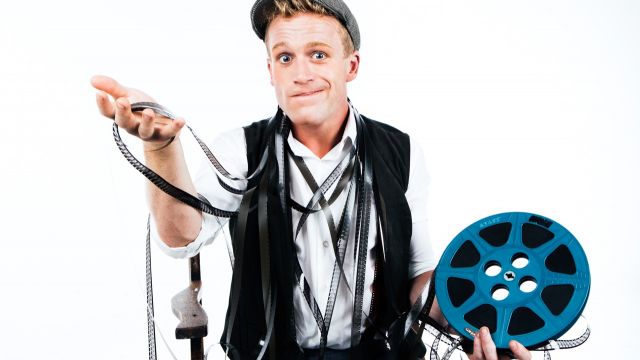 A love story between a performer and an audience member can’t go wrong, right? Wrong! Kaput, starring Tom Flanagan, is a delightful comedy that pays homage to the classic physical comedy and slapstick of Charlie Chaplin, Buster Keaton and skits such as “The Plank”. If audience reaction is anything to go by, physical comedy still well and truly hits the funny bone.

Flanagan has children and adults in stitches within minutes as popcorn is shared around the room and a romance blossoms between a front row audience member and the performer. A film begins, ‘A Love Story’, but this is soon interrupted by all means of hilarious issues involving a film projector, a movie screen, a ladder, and of course, what must be the all-time favourite slapstick prop, a glue bucket.

Flanagan handles the audience with expert ease, giving back strong energy and working quickly to improvise whenever an audience member is involved. His physical antics and immense acrobatic skill transcend words and enable the show to be enjoyed by people from all walks of life, including those who may not speak fluent English, or those who are hearing impaired. Look out for a cameo from Australia’s youngest up and coming circus performer, Tom’s seven month old son Earnest Flanagan; it’s an added treat if you’re lucky enough to catch it.

If you have kids take them to see this show. If you don’t have kids, borrow someone else’s. If you can’t borrow any, go anyway and soak up the shrieks of laughter and giggles of delight from young and old alike.