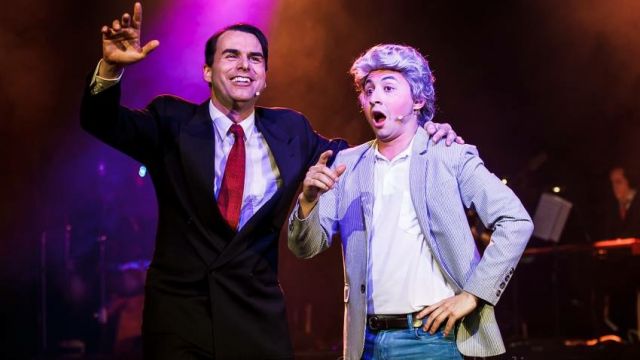 Some of the older Bankstown ‘true believers’ in the audience may have been just a little critical of the raunchy depiction of Hewson and Keating in On The Floor/I Wanna Do You Slowly but the younger members of the audience loved it  … even though some of them must have been preschoolers at the time. The fact is that, as well as being true to its political satire, Birdie Productions and its creative team and cast have given the musical the ‘oomph’ it needs to take it beyond its political punch. They are young, enthusiastic, talented and energetic and director Jordan Shea doesn’t let them miss a beat.

The hard-working 5 piece band (led on piano by Musical Director Philip Eames) is set on rostra behind a perspex screen at the back of the open stage. Red predominates in the theatre itself – seating, carpet, curtains – so it’s a perfect setting! Lighting designer Liam O’Keefe uses multiple moving spots to highlight the hectic pace of the production, and Alexandra Lewtas matches this with fast, fairly demanding choreography, which the ensemble executes with apparent enjoyment and ease.

Casey Bennetto is a clever writer. His music is fast and foot tapping, as it must be to push political satire into musical theatre mode. However, it’s his lyrics that are the intelligent essence of his writing and sometimes, just sometimes, in this production, the amplification of the music and the voices means Bennetto’s clever ability to weave the political figures and intrigues of the time into pithy lyrics is lost. It’s a minor criticism from a bit of a purist – and really does not affect the overall quality of the production.

Andy Leonard is impressive as ‘the man’. He makes no attempt to impersonate Paul Keating in any other way than his stature, his bearing and a few gestures. Rather, he finds the various dimensions of the character through the words he sings (very powerfully!) and his total command of the stage and the audience. Leonard’s vocal strength, control and variation match the demands of this exacting role. 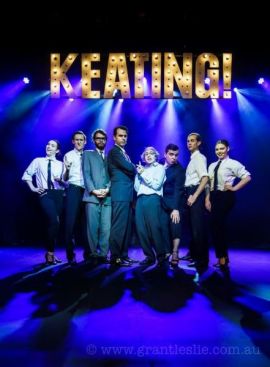 Doron Chester takes on the double roles of Bob Hawke and John Howard. Whilst the personalities of both of these past PMs lent them to impersonation, Chester takes them to caricature, which, while funny, is out of keeping with the way in which the other politicians are portrayed. Nevertheless, he is a clever performer who sings and moves well – and establishes a great rapport with the audience.

Bennetto’s inclusion of Alexander Downer’s ‘fish net stocking’ moment is always a highlight of this show – and Jonathon Holmes does it in style. He struts, poses, thrusts and shimmies, neither losing the sting of the lyrics nor the pace of the pretty racy choreography. Holmes also plays John Hewson in a less suggestive costume but a similarly spicy performance.

Richard Woodhouse performs foreign affairs minister Gareth Evans with introspective flair. He moves with speedy but controlled grace on the stage while still finding depth in his characterisation – and his ‘pas de deux’ with Cheryl Kernot (that is not quite a ‘foreign’ affair!) is one of the directorial highlights of the production. Sean Curran leaves his energetic routines in the chorus/ensemble to ‘frock up’ as Kernot and he does so with aplomb.

Curran is joined in the ensemble by Rebecca Morris, Alexander Morgan and Claire Mitchell and they are intrinsic to the success of the show. They sing while moving in carefully rehearsed routines that demand control, speed and precision. And they do it faultlessly.

Executive Producer Rodney Bertram should be extremely happy with this, Birdie’s second production. Jordan Shea and Philip Eames have ensured this Keating loses none of Bennetto’s clever historical satire whilst ensuring plenty of contemporary, fast-paced appeal.