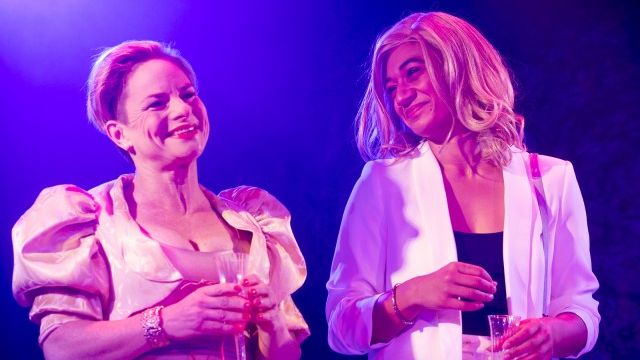 When writer David Finnigan speaks about his play Kill Climate Deniers he calls it “stupid, over-the-top, flashy, ridiculous, fun — and angry, because I am angry.” That’s a long list, but one that looks good after its dynamic premiere at the Stables Theatre. Winner of the $10,000 Griffin Playwrights Award for 2017, the play shows off its class effortlessly.

Armed with cut-out, see-through guns, a gang of female climate warriors, or eco-terrorists, overrun a concert at Parliament House given by Fleetwood Mac. Also present is the flashy Environment Minister (Rebecca Massey) and her Media Manager (Sheridan Harbridge) who, by chance, are in the ladies’ loo when the first bomb goes off. They make their way, action movie style, through the mayhem towards head terrorist Catch (Lucia Mastrantone) and there’s a big fight near the end using the pole dancing equipment that’s been on show from the beginning. Absolute bliss.

Also present are Eden Falk, stand-in for Finnigan as the writer, and Emily Havea, who plays several characters. All performances are expertly handled by Lee Lewis, who has staged the whole amazing event to within an inch of its life. 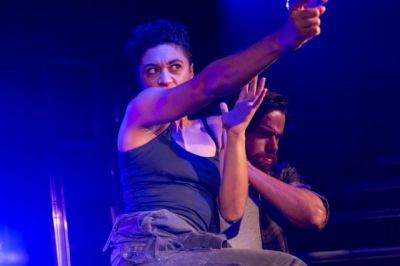 And all in the cause of climate change (‘I love a sunburnt country, but not that much’). David Finnigan was in conflict with commentator Andrew Bolt who, when he saw the play’s title in 2014, complained loudly that it shouldn’t be supported by public money. You can see the years of hard sweat and tears that have gone into the show. It was well worth it.