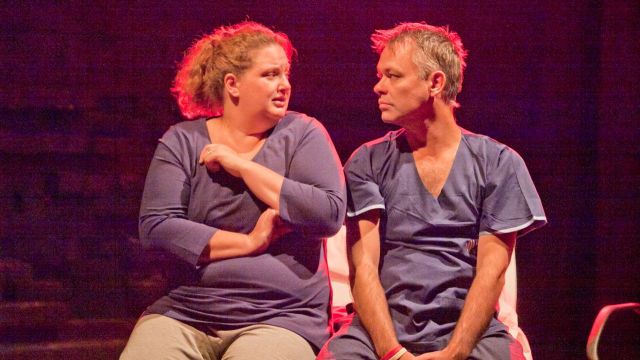 Community Theatre is alive and extremely well in the outer suburbs. But where the 1812 Theatre in Upper Ferntree Gully uses it’s main theatre, The Lowe Auditorium, for comic crowd pleasers or who-dunnits for the mainly over-sixties, its alter ego…The Bakery… specialises in newer works with contemporary edge aimed at audiences who like to think with their drama. It’s a brave choice to run both kinds of theatre side by side.

The Bakery’s newest offering is Killing Jeremy, a two hander about a girl whose partner is in a coma because of a car accident she caused, waiting for the life support system to be turned off. Whilst it doesn’t sound like a laugh a minute, there are laughs a-plenty as well as real poignancy. It’s a well enough written piece, by Victorian playwright Bridgette Burton, but it is the superb sympathetic direction by John Bishop, and two wonderful performances that lift this production far beyond the average and make it a moving and intimate experience.

Bishop has wisely cast two highly experienced actors in the roles. Angela Ellis is Madeline….31 and pretty daggy. She’s full of self-deprecating humour, dressed in Trackie Daks and a tee –shirt, the mousey blonde hair in a ponytail. Her Madi is both terrified and defiant, guilty and angry, loving and yet needy…in short, she is a beautifully rounded and fully realised human being whom you quickly forget is a character. She’s extremely funny as well as endearing and it’s impossible not to empathise with her, excellent acting on all levels. Now that I have seen her I would travel even further than the 60kms I covered to see her next performance.

Matching her is Nigel Leslie as the Metalhead but romantic Jeremy who wants so badly to marry her…a fine performance from an actor we need to see more of. These two command the performance space for 80 minutes….sometimes in soliloquies – but often in interaction as Madi brings Jem back to life in her imagination. They play superbly off each other but also bring other characters to life…the doctor, the nurse, Jem’s mother, even his old girlfriend (played very convincingly by Leslie himself).

Bishop uses the limited space wisely and the major prop is the hospital bed and a chair. The brick wall of the bakery doubles as a screen for the footage of the accident from Madi’s POV (the bricks give a nice sense of fuzzy distortion) and there is excellent audio design and operation by John and Loretta Bishop, with lighting designed by Craig Pearcey and operated by Alex Di Pietro. It’s fair to say that a great deal of love has gone into understanding and realising every emotional nuance in the play. It’s a stellar production from Swampfox and 1812 should be justifiably proud to have the production under their banner. There are many creatives living in the hills who don’t know about The Bakery and its contemporary plays and they need to be marketed to specifically, as the core audience of 1812 is aging rapidly.

But (there’s always a but) there’s a caveat to this review, and it concerns 1812 policy. IMO it is disrespectful to both the cast and the press to invite media to what is essentially a last rehearsal. The rationale is that The Bakery has limited seating and the season might sell out. Fair enough, but that is something you should wear. No professional company would EVER allow media at a preview night, and 1812 is very professional in most of its directives. With an audience of just 20 or so media and guests, it’s astonishing the performance was as good as it was. Moreover, 1812 provides a lovely supper, a glass of champers and a chance to mingle with other theatre-goers and the cast at every performance…it’s part of what we look forward to and why we come from great distances (I come from Frankston). That doesn’t apply to press night at The Bakery. We come out into a darkened foyer with the bar closed and no-one around, as if the show itself has been forgotten….the ambiance is gone and the last thing we remember is feeling deflated. These contemporary plays are where the next generation of theatre-goers will come from. They deserve better than this. Please re-consider the policy.