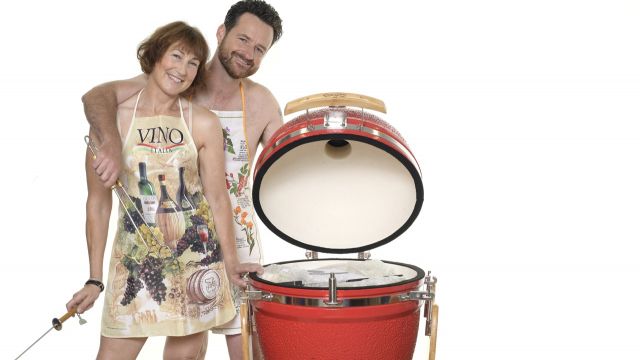 When Roger (Nigel Tripodi) dares to stop and look at a bright red barrel of a barbecue, salesman Hank (Michael Eustice) pounces on Roger’s uncertainty, finding every button to push that persuades him to buy what he doesn’t need – and offer it as a wedding anniversary gift to his vegetarian wife, Melissa (Sharon Malujlo).

Written by Texan born Adelaidean Jimmy Lyons, it attempts to satirise contemporary Australian masculinity through provocation and intentional disdain for political correctness. The challenge with satire is to ensure clarity that you’re laughing at the bad guy, not with him – and this new play doesn’t always stay the right side of the line.

Eustice is suitably slimy and inappropriate in his character's sales techniques and commentary on women, his 1970s appearance matching his attitudes. Tripodi does well unpacking the mild-mannered Roger into something larger and more aggressive than he’s comfortable with – though the chemistry with Malujlo is lacking. She introduces herself to us through a venomous spit of lawyer-logic, softening only when she tries to explore the reasons for Roger’s change in attitude. The writer is inconsistent in offering convincing language for Melissa, though Malujlo does a better job of smoothing from confrontation to exploratory: it swings from bitter and mean to a desire to understand; from belittling to including – but the overuse of the F-word diminishes its power to provoke.

When it realises connections between the complexities of gender and sexual politics, there’s a glimmer of interest: there’s a great dynamic between Malujlo and Tripodi for a short few minutes, an exploration of what it means to “be a man” and Roger’s lack of sexual arousal caused by his apparent disempowerment. The subsequent role reversal is both violently confronting and fascinating, yet almost as soon as this engages, the play descends into an English-style farce and its explosive conclusion is lazy and shocking.

There is laughter here at the absurdities of exaggerated masculinity, but through this amplification, it trivialises the real world impact to women and others, for which this toxicity is a violent reality.