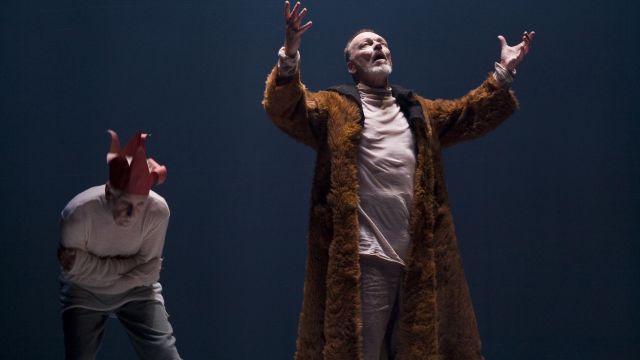 Poor Shakespeare. His works have been trussed up, borrowed, abused, paraded as ‘chocolate box confection’ and shoe-horned into any and every possible ‘modern dress’ incarnation at the whim of directors the world over.

“Shakespeare,” wrote Peter Brook, “never lingers very long on the same scene, his style changes constantly … so the process of preparing Lear … was elimination – of scenic detail, costume detail, colour detail, music detail …”. And Brook would know. His 1962 Royal Shakespeare Company production starring Paul Scofield as Lear, is revered as the benchmark by which all other productions are measured – even by people like me, who weren’t even there.

But on Wednesday night, every Lear I have seen or imagined was swept aside by an ensemble of performances and a production so profoundly, beautifully complex that not since I melted, hypnotised, into the wall during a Kabuki performance in Tokyo has a piece of theatre stunned me with its textual and visual complicity and simplicity. That it should be this grand, torrid family drama of insanity, insecurity, betrayal, greed and envy is an absolute credit to Ms Potts, who has quite obviously staked her reputation, and that of Bell Shakespeare, on it. And how magnificently well-rewarded for the courage of that vision she is.

It is impossible to deny the influence of the time-honoured Japanese theatrical traditions of Kabuki, Noh and Butoh on Ms Potts’s paper-cut precise and bewilderingly painful ritualistic exorcism of Shakespeare’s greatest play. One of the fundamental Noh disciplines is that each member of the ensemble contributes to the performance their individual, impulse-driven instinct – resulting not in an ordered structure of a well-rehearsed ensemble – but a unique performance of spirit and rhythm that exists, like the act of theatre itself, for the very first time. Independence from all that has gone before.

Nor are there ‘stars’. Instead, the discipline demands – insists – that actors deliver a truthful instinct so pure and ego-less, that the performance dynamics are constantly in a rarified and exhilarating state of continual flux. It’s an enormously risky choice – and here, it is realised with something close to Zen-like perfection.

In Jane Montgomery Griffiths’ astonishing ‘Goneril’, this discipline was absolute. Her twitching, grotesque, lusty, power-hungry Princess was as bold, as risky and as adventurous as any performance I have ever seen. Josh McConville’s Butoh-inspired ‘Edgar’, was a mind-blowing marriage between physical vocabulary matched with an astonishing vocal range and prowess. As the blinded ‘Gloucester’, Bruce Myles was riveting and heart-breakingly raw and honest in his connections to the text and his dismal circumstances. Tim Walter’s sexy ‘Edmund’ was nothing less than the perfect object of the Princesses’ (and, audibly, most of the audience’s) desire. It can be hard to be sexy in Shakespeare – but not for Mr Walter, whose flirtation and silly, juvenile, power-hungry fantasies are brought bone-baringly to life, resulting in the deaths of practically everybody. His desperate, panicked admission of guilt – like a spoilt little boy who has accidentally burnt the house down playing with matches – capped off a brilliant, passionate performance. Peter Carroll’s ‘Fool’ will be remembered as, if not the, then certainly one of the finest of any actor’s on a Melbourne mainstage. It is, for my money, his career’s best, and should be seen to be believed.

The ensemble are inspired and supported throughout this immensely challenging performance by the divine, playful, inventive and intuitive percussion from Bree van Reyk. Dale Ferguson’s set and costume design is constantly startling – perhaps no more so than the devastatingly simple use of fur coats scattered about the huge stage, to represent the casualties on the battlefield. Symbolic in its minimalism, here is design that is never less than entirely of service to the vision, the performances and the text. The utilisation of the large, round revolving disc that sits centre stage provides the ensemble one opportunity after another to revel in their complete command of this production’s adventurous, intricate and deceptively simple stagecraft. At turns, with consummate ease, it becomes music box, throne, clifftop, vast castle chambers, indoors, outdoors and, with something like centrifugal force, it takes centre stage as Lear and his Fool battle and rage against the elements during a stunning storm sequence. Nick Schlieper’s amazing lighting design is so intrinsically at one with the production design, and as the play moves to its icy, barren second act, the lighting sends both visual and literal shivers right across the stage with some fascinating use of what looks like huge, white sheets of latex. The effect is mesmerising.

But at the heart of King Lear, there is Lear. And John Bell’s performance is one of such beautiful, heartfelt purity that one can only imagine it’s possible from an actor so entirely within a character’s skin that anything more would risk tearing it. It is a beautiful, intelligent, understated performance that, while successfully providing the massive text with its pulse, steadfastly refuses to corrupt the emerging performance dynamics with showy self-indulgence. His wondrous, wide-eyed stare ahead of him in the seconds before he died, brought tears to my eyes.

For a company celebrating 20 years of performing the works of William Shakespeare, this is an inspirational and unforgettable night at the theatre. See it.