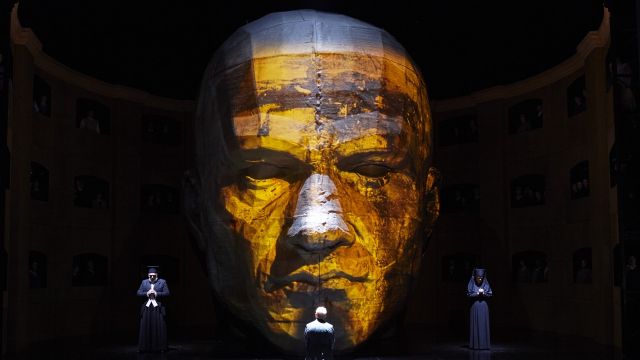 Conceived by Karol Szymanowski and his co-librettist Jaroslaw Iwaszkiewicz in 1918, King Roger was first performed in 1926, but was produced very few times until Charles Mackerras conducted its London premiere in 1975. Since 1988 it has seen a revival, with nineteen performances across the world. It comes to Australia for the first time directed by Kasper Holten in a collaboration between Opera Australia, The Royal Opera House and Dallas Opera.

The program describes it thus: as“It is a rare opera. There is no death, no duel, no romantic entanglement or disguise. It is the story of an inner struggle … between Christian restraint and reason on one side and pagan abandonment to hedonistic pleasure on the other”. It revolves around the 12th Century Sicilian King, Roger, who is torn between his orthodox religion and the call of a strange, new Bacchanalian-type faith proclaimed by a man who is known as “The Shepherd”. In the original libretto, King Roger converted and followed the Shepherd, but Act 3 was rewritten halfway through composing the opera to have a much less definite ending. Despite his love of the romance of Mediterranean culture and the melting pot of peoples and religions he saw in his travels, Szymanowski also saw the effect of the Russian revolution on his homeland and his family estate. Maybe it was this that persuaded him to make the ending of the opera a little more restrained.

Michael Honeyman is outstanding as King Roger. Strong and commanding in Act 1, he agonises as he witnesses the orgiastic music and dance that lures his wife, Roxanna, and his people in Act 2, until in Act 3 he eventually resists the Shepherd and turns to a new life with the rising sun. Honeyman finds all the agonizing indecision of this king in anguished notes that hover as he writhes, fallen and wavering, until he regains his inherent power and strength in the joyous hymn to the sun that concludes the opera.

Roxanna is sung by Lorina Gore, who obviously delights in the lyrical notes of the music, especially her aria in Act 2 where she urges Roger to listen to the Shepherd’s philosophy and recapture the pleasure that they once found in each other. Albanian tenor Saimir Pirgu is The Shepherd, his rich voice reaching out to entice and eventually entrap those who try to resist the pleasures that he describes in song.

As members of the audience chatted as they left the opera, it was interesting to hear how many commented on the fact that it was good to see “something different” and to hear “music we haven’t heard before”.