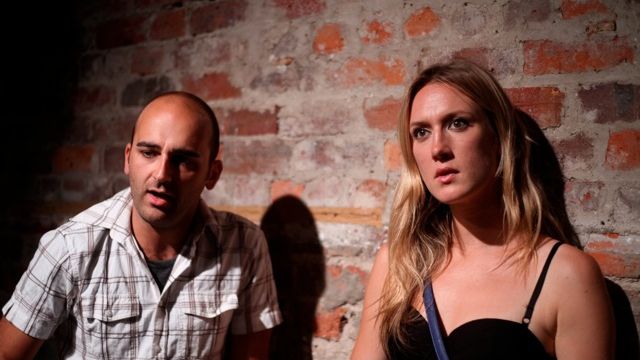 Kiss Me Like You Mean It is written by Chris Chibnall, a British playwright who is also a writer for TV with credits including Doctor Who, Life on Mars and several seasons as co-producer on Torchwood. But there’s not a wisp of science fiction or fantasy on display here. This is a strong character-driven piece, very down to earth, populated by just four characters but all of whom are engaging, interesting and believable.

The first act introduces us to Tony and Ruth, two young people meeting awkwardly in a back garden while taking refuge from the noisy party inside. Tony is immediately attracted to Ruth, but his efforts to come on to her are far from impressive. Despite this, she gradually warms to him as the story progresses – despite interruptions from a raunchy elderly couple who are having noisy sex up against the window of their house next door. Eventually our seniors, Don and Edie, come down and introduce themselves, Don in search of a curry-flavoured condom to add further spice to the proceedings.

In act two, we move into Don and Edie’s flat to discover what’s behind this outpouring of passion and learn more about their relationship. Tony and Ruth arrive back on the scene just as the story takes a sudden turn from romantic comedy into starkly serious subject matter. To say more would spoil the surprise.

As you might imagine from the precis, sustaining a piece of theatre likes this relies heavily on the skill of the performers. This is especially the case in such a tight performance space as the Owl & the Pussycat – a narrow cricket pitch of stage for the garden, and a very compact set to evoke Don and Edie’s home. The audience is so close that those in the front row could reach out and touch the actors.

Thankfully, the whole cast was up to the job, delivering solid performances with absolute commitment. Rob Gaetano as Tony is engaging while self-deprecating. Chloe Reid as Ruth gives us a cool exterior with a nice spark of genuine warmth beneath, which gradually emerges as the play progresses. Kirk Alexander as Don is full of bluster, passion and infectious energy. And a special mention must be made of Carrie Moczynski, whose genuine, touching and multi-layered Edie was a standout.

A warning: there is swearing in the second act, in fact a long list of profanities, very funny in context. There’s also smoking of herbal cigarettes, but this didn’t seem to bother anyone. Of more concern was the heat due to the proximity of the stage lights and lack of aircon – bearable, but requiring much of the audience to fan themselves with their programs throughout.

But a little discomfort is well worth it for two hours of good storytelling and well-performed theatre. Kudos to the director, Kate Shearman, the production team and the cast for bringing this engaging piece to life.