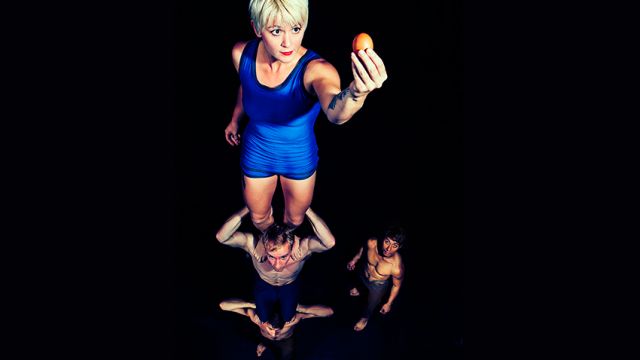 Knee Deep is a contemporary approach to physical theatre and circus, without any glitz, and with (thankfully) little mime. The artists are quite seamless and fluid in most of their movements, and their strength is truly something to behold – particularly the strength of the sole female artist, who takes a traditionally masculine role several times in the show, most impressively by moving from prone to all fours with a man standing on her back, and then anchoring a tower of the three men on her shoulders.

The expected basics of tumbling and balancing serve to begin the show, but the standout material comes towards the conclusion. The aerial ribbon dancing is a highlight, and elicited collective gasps from the audience as the artists unravelled themselves just short of hitting the stage. Similarly, the trapeze section (reached via a human pyramid) is impressive, as the performers clamber over each other time and again, performing a series of poses each more extraordinary that the last.

Some of the more intricate elements of the performance (including literally walking on eggshells) are projected onto a screen at the back of the Spiegeltent, which is a welcome addition due to the nature of the venue’s seating. The music is exceptional (a changing mix of classical violin, piano, French jazz, chill out, and some techno), however there is a slight clunkiness to the fade out between tracks.

Knee Deep is a much pared back circus performance – without big staging or impressive costumes – so the show relies solely on the talent of the artists. While there’s no doubt these performers are incredibly talented, at times their athleticism and ability isn’t quite spectacular enough to warrant the stripped back approach to the production.