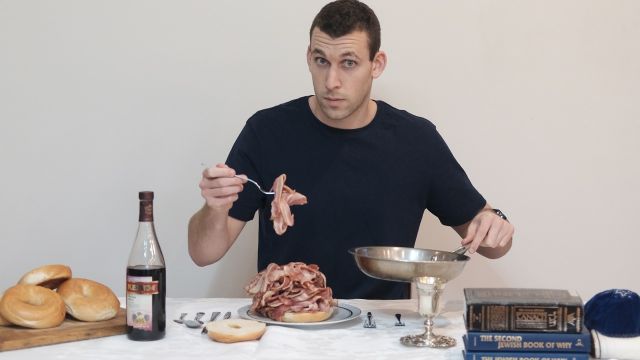 1. The word kosher, literally meaning “clean” or “pure,” refers to food that has been ritually prepared or blessed so it can be eaten by religious Jews.

The humour begins even before the show. It takes great wit with a generous helping of ironic humour for a good Jewish boy to do a show called Kosher Bacon at The German Club and he comments on this.

Shafar is a lawyer, turned satirist who relishes Stand Up and who describes himself as “culturally Jewish.”

His humour is self-deprecating and members of his family all take a turn in being the butt of his well-constructed humour and patter. His traditional “Jewish mother” and her ongoing celebration of his circumcision is a treat.

The millennium generation, ecology and current social issues are all woven into a witty, well-paced show.

The laughter rolls, rather than peaking with the odd good joke and the structure and cohesiveness of the show is exceptional. It is rather reminiscent of the successful off-Broadway show, Old Jews Tell Jokes.

Whilst never explicitly qualified, the name of the show reflects stories that are genuine, and that highlight the possibly stereotypical foibles of the group that he calls, “my people”.

Kosher Bacon is reputedly based on a taunt about bacon, (which is forbidden to Jews) levelled at Shafar during a Catholic versus Jewish school football game. Advice to his “partly Kosher” Jewish friend (who enjoys “kosher bacon”) about trying to outwit an all-powerful God is an audience pleaser.

Understanding Jewish culture and humour is not essential to enjoy this show. The 55 minutes really explore multiple aspects of contemporary issues and people and their relationships, regardless of religion.

Particularly clever is the way that ISIS is threaded through parts of his stories, delivered with humour and no obvious malice.

His one-liners are well planted. Involving the audience and talking about the longevity of relationships, he describes phone contracts as being harder to get out of than marriage. “Optus is for life”, he quips.

Lapsing into Yiddish vernacular, his routine about “schmeckle shots” as part of courting and lessons on internet dating has the audience howling with laughter.

The venue takes about 50 audience members, thus it is a personal, up close show.

The stage is simply set and Shafer is within a handspan of his audience. His face is lively and animated, engaging the audience with very direct eye contact. He uses the microphone well and is clearly skilled at “working his audience”.

Perhaps my only (very small) criticism is Shafar’s mannerism of intermittently tugging at the hem of his T shirt, directly above his schmeckle!

Shafar is a seasoned performer who currently writes for The Project. He has performed internationally and locally as well as in producing and hosting  satirical news and comedy for television and online.

This is a show for those who enjoy subtle comedy presented in an engaging way. Shafar is charming, clever, and very insightful.

“Mazel tov” Michael on your upcoming marriage to a “good Jewish girl”.