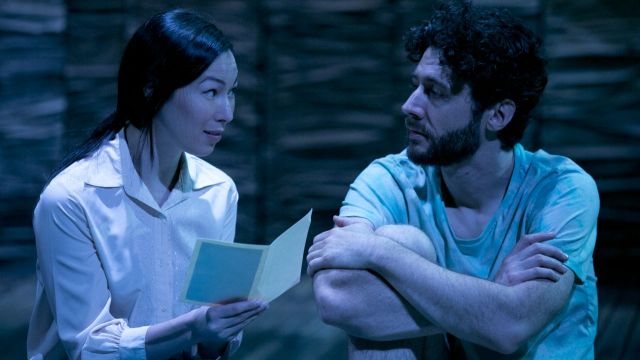 We all know — don’t we? — that Superman emigrated from the planet Krypton and that the only substance that can render him helpless is a chunk of kryptonite. Sue Smith certainly hopes we know this superheroic fact, for otherwise the title of her terrific new two-hander will be meaningless.

The metaphorical kryptonite examined here is the essential Chineseness that Smith’s heroine Lian retains after years of being legally Australian. And her boardshorts-wearing hero Dylan is always and incontrovertibly from Planet Oz.

Their 25-year on-off love story is told in a co-production of intense modern theatricality. Sydney’s STC gets the world premiere showing of a dynamic production by the Adelaide STCSA’s Artistic Director Geordie Brookman.

Smith has long been a major presence in Australian television drama. This switch to the stage follows a residency and a co-commission with the STC. Their collaboration has been fruitful.

The play’s 25 years begin in 1989. Events — not in strict order — are marked by the actors painting the year on the absorbent, ruched walls of Victoria Lamb’s simple (and simply dynamic) setting. But their mutual attraction does not allow for an easy relationship and a first kiss is only gained 19 years later at the Beijing Olympics. Lian is now a businesswoman moving between the two countries and Dylan is a Greens Senator forever trying to do the right thing.

Both actors have to work hard for the 90-minute, no-interval duration. Tim Walter is an appealingly lightweight politician whose surfing background is always apt to surface. Ursula Mills is utterly delightful as the shy student determined to prove herself on this new and surprising planet: she grows and alters convincingly.

At first they must exhibit the changing years with but four chairs, a paint pot and a handful of props, though the setting opens out surprisingly and, with the help of some outstanding lighting from Nicholas Rayment, even gives a good account of the Olympics Opening Ceremony.

There’s an excellent non-stop soundtrack by Andrew Howard, with music composed by DJ Trip, but the levels need some rethinking. Too often vital dialogue is drowned by music or effects.

*** After its Sydney run Kryptonite moves to the Space Theatre at the Adelaide Festival Centre for a three-week run, 22 October – 9 November.