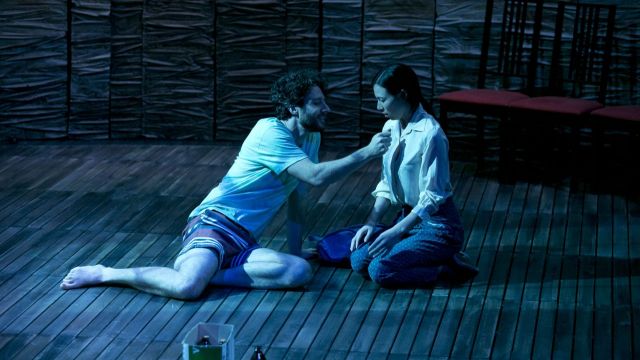 Kryptonite is a brilliant new work by celebrated playwright, screenwriter and script editor Sue Smith. Produced in Sydney by Sydney Theatre Company and now in Adelaide by State Theatre SA, the play is nothing short of stunning in every respect, including its production.

Staged in the 25th anniversary year of the memorable and tragic events in Beijing’s Tiananmen Square, the intricately crafted and evocative play starts simply as a love story, the beginnings of a decades-long relationship between two people from entirely different worlds. Kryptonite develops many dramatic layers though, until the Australian man and Chinese woman at the centre of the story are joined by billions of others and the narrative is one of cultures and nations.

It’s an intelligent story, one of contradictions, of ideals and ambitions, innocence and worldliness. Most of all, it is an exploration of the tipping point there is for perhaps all of us, the personal Kryptonite that we can’t resist, that makes us weak. In this play it’s that moment when idealism gives way to self-interest and survival, leaving victims in its wake.

In the past, the words ‘yellow peril’ conjured up images of invading Chinese armies, whereas now it’s a fear of Chinese investors taking over our mining resources and real estate. This is a story of irrational fear and prejudice too.

Ursula Mills gives a towering performance as Lian, her character’s persona changing as the story unfolds through the years from the late 1980’s up to the present. Starting out as a timid, poverty-stricken and idealistic Chinese student in Australia, Lian has us in the palm of her hand. We feel for her, because she is so utterly vulnerable and believable. When she succumbs to the Kryptonite of ambition perhaps we even understand. Tim Walter is sublime as Australian student Dylan, who later becomes a possibly corrupt politician. Walter’s performance is brave, too, in view of his brief nude scene. Dylan is a laid-back young man when he meets Lian, with low-key ideals that don’t match hers, but the impact on him over decades of obsessive love for this woman is immense and wonderfully portrayed.

The set for the production of Sue Smith’s thought-provoking and frequently funny play is deceptively simple, just as the story first seems. It is made up of a plain screen at the rear of the stage, but one capable of surprising us. Time and even place are splendidly designated on the screen by paintbrushes and pots of paint; paint that fades to invisible before our eyes.

The production’s score, soundscape and lighting are very fine. The scene in which the Beijing Olympic fireworks are portrayed is an imaginative mix of light and sound. When images of the ultimately tragic 1989 Tiananmen Square student protests are portrayed, the story reaches a gut-wrenching conclusion… and it’s here the set provides its final superbly innovative and emotive surprise.

This critic reviews many shows but there’s no doubt in my mind, Kryptonite is by far the best I’ve seen in 2014. Don’t miss it.