The Kursk by Sasha Janowicz 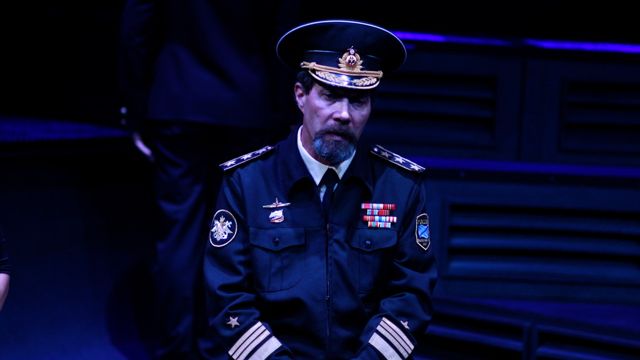 Two Stage Whispers reviewers have recently seen The Kursk during its extensive tour.

Hayes Gordon taught that great theatre is a brilliantly crafted script breathed to life by inspired, sensitive actors. Peripherals like set, sound and lighting need be no more than essential and supportive.
The Kursk is a perfect example:
Sasha Janowicz’s script is lean, immediate, and its love focus engages us. The cast of six rivet our attention every moment of the drama.
Michael Futcher’s set looks substantial is skeletal and adaptable. Jason Glenwright devised one of the simplest but cleverest lighting designs I have seen; his use of and-held torchlight effects magnified the claustrophobia we shared with the stranded submariners. And the eerie Luke Lickford soundscape sucked us into the Arctic depths.
Eugene Gilfedder was in his element as the anguished Admiral Popov whose dilemma was to try to save his trapped sailors or to avoid an international incident as new information flowed in. Julienne Youngberry’s bewilderment broke our hearts: Olga, the new wife of a trapped sailor desperately awaited the news whether he was among the living or the dead. The other four players worked brilliantly as an ensemble to cover seventeen more key roles in this naval tragedy.
The play runs a tight 80 minutes without interval. At the end the audience sat silent and reflective, needing time to resurface. Our distress and confusion was compounded by a brief slide show depicting the real people who had been caught in the tragedy.
Plays of this calibre are what we expect from the West End or Broadway. This was a local production. The Kursk was developed by Matrix Theatre (a Brisbane independent company), toured nationally under Critical Stages banner.
(Just for the record, the Russian premiere of this play will take the stage before the end of 2009, a feather in Australian theatre’s cap.)

The Kursk is a riveting play based on the actual disaster of the sinking of a Russian submarine in August, 2000. The tragic story is told by six actors on a simple set complimented by sound effects, appropriate lighting and time–lines projected on to a back screen.
The play had an unusual start in that the entire cast, so well costumed, sat and stared at the audience for a good five or more minutes before the action began. Powerful stuff indeed.
Playwright Sasha Janowicz plays of one of the seamen in this tight drama that is enriched by powerful performances from Eugene Gilfedder, as a stressed Russian Admiral, and Julienne Youngberry, as the wife of one of the doomed submariners.
Edward Foy and Dirk Hoult gave good performances as Russian sailors, both as Kursk submariners and as would-be rescuers in submersibles, while Amanda Mitchell was also superb.
The play runs without a break and rightly so. Full credit must go to playwright Sasha Janowicz for his extensive research on the Kursk disaster and to director Michael Futcher for telling the story so effectively and convincingly on a simple set with minimum props.
This production of The Kursk is an example of what a dramatic medium theatre can be. Simply put, this is theatre at its very best.