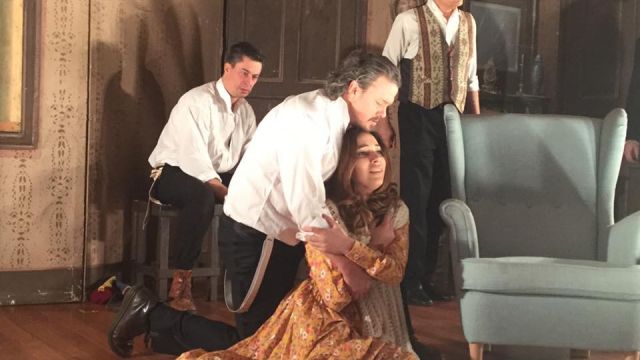 There are an amazing number of opera companies, amateur, semi-professional and professional, now operating in Victoria. Opera Van Diemensland started in NSW with the aim of bringing semi-professional opera to country centres, and has now moved to Victoria. This was the only Melbourne performance, and was well attended.

The venue was anything but kind, having a very shallow stage, but the directors made innovative use of the space. Some entrances and exits were through the audience and in the third act Mimi was obviously hiding outside the area Rodolfo was in. So often I’ve seen her hiding in plain sight. There are stretches of music with no singing, but the singers always moved with purpose during these parts.

There was some very impressive singing. Barbara Zavros’s soprano soared gloriously over the orchestra, yet was tender and vulnerable while dying in the last act. Martin Buckingham was an ardent and tender Rodolfo, with a thrilling top. The two final “Mimi”s at the end of the opera are usually sung forte, but his second one was a whimper, which was much more effective. I’ve never heard it sung like that. Christopher Tonkin was an angry Marcello and Jordan Auld a vivacious Musetta.

Experienced baritone Lucas de Jong was a strong and energetic Schaunard, while Henry Shaw sang beautifully as Colline. His “Coat Aria” was a highlight. The well-drilled children’s chorus sang enthusiastically.

The small orchestra acquitted itself well, with Alan Cook very supportive of his singers.

Though the sets were minimal this is one of the best Bohèmes I have encountered. It’s a shame there was only one performance in the city.