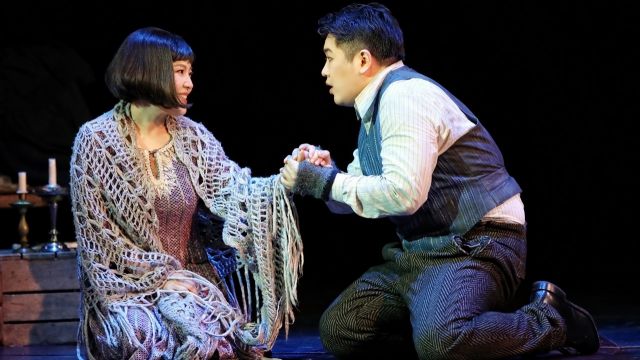 Puccini set La Bohème in the sybaritic Latin Quarter of Paris in 1830. Opera Australia’s 2018 production on Sydney Harbour saw it set in Paris in 1968 where civil unrest plagued the city. In this production, Gale Edwards sets it in 1930s Berlin in the final decadent days of the Weimar Republic where, “free of censorship, liberalism was extensive”.

Wherever it is set, La Bohème is a classic love story where the passion of first love is darkened by jealousy, mistrust and poverty.

In Edwards’ production, artist Marcello paints The Crossing of the Red Sea on the high walls of a freezing rented warehouse and writer Rudolfo consigns his latest play to the boiler to provide a little warmth. When their friends Colline and Schaunard suggest going to the Café Momus, Rudolfo remains alone until a knock at the door brings Mimi looking for a match to light her candle. They fall in love and join the others, where Marcello re-ignites his love for the lovely Musetta.

Were it not for Act II and the busy, bustling Café Momus, the opera would be just a sad love story told in beautiful music by incredible voices. At Café Momus the opera becomes more colourful – and in this production, more provocative, with fishnet, feathers and a little nudity.

In glittering silver, Musetta cuckolds her latest admirer and joins Marcello and his friends. Hawkers extol their wares while entertainers strut on stilts and the toy seller, Parpignol,beguiles a chorus of children whose light, young voices bring an extra brightness to the production. 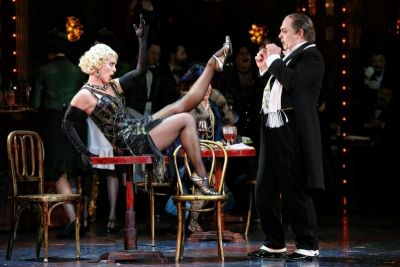 The cabaret-style of the second act gives set designer Brian Thomson the opportunity to use the towering height of the Joan Sutherland stage to create a multi-tiered series of theatre boxes illuminated by glittering lights and a revolving stage on which a band of yellow braided frauleins march the opera into interval. Costumes, by Julie Lynch, are enticingly seductive. ‘Tis not often the opera chorus gets to be so dazzingly revealing!

Karah Son and Kang Wang play the sad lovers, their voices soaring so strongly in moments of passion, so sadly in moments of regret. The joy of their first duet "O lovely girl" in Act I is matched by the apprehension surrounding their final duet, "Have they gone?"

Samuel Dundas and Julie Lea Goodwin reprise their stunning performances as Marcello and Musetta, with Richard Anderson as Colline and Michael Lampard as Schaunard. Graham McFarlane is an easily tempted Benoît and Nara Lee an energetic Parpignol.

No young lover should end as wretchedly as does Puccini’s poor Mimi: humbled by rejection, racked by consumption, dying in a cold studio with poverty-stricken friends who pawn a pair of earrings to buy medicine that arrives too late to save her. And yet over 124 years she has been made immortal by exalted sopranos in opera theatres around the world – just as Karah Sang does in this production.