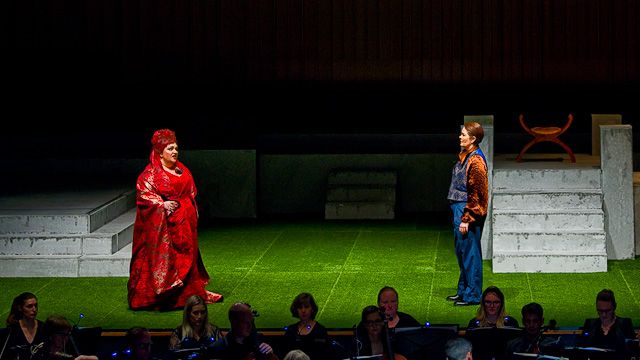 Wolfgang Amadeus Mozart’s La Clemenza di Tito (The Clemency of Titus) was commissioned for the coronation of Leopold II of Bohemia, and Mozart hoped to use the opera’s themes to inspire humanity and forbearance in his new emperor.

La Clemenza di Tito concerns the plot of Rome’s former emperor’s daughter, Vitellia, to regain her chance at the throne by assassinating the new emperor, Tito, since Tito apparently will not wed her.  She sets the plot in motion by promising herself, in exchange for the deed, to Tito’s friend Sesto, who is in love with her.  When circumstances change and Tito chooses Vitellia for his bride, the plot has gone too far, and Vitellia is unable to call off the assassination.

The straightforward staging of this production, on a simple but realistic-looking Roman Forum, made for easy entrances and exits and for a lighting setup that was almost programmable, though it struck me more than once that a spotlight could have more steadily followed one soloist or another around the stage.

In an age of limited audience numbers and devastated economies, opera is a tricky thing to mount with confidence.  So the decision by an opera company in its infancy to stage Mozart’s La Clemenza di Tito, its first production, on a large Canberra stage and with a 30-piece live orchestra was a brave one.  But doing so has made the company impossible to overlook, both by opera lovers and by potential performers, and its courage will doubtless pay off in drawing the interest of new operatic talent.