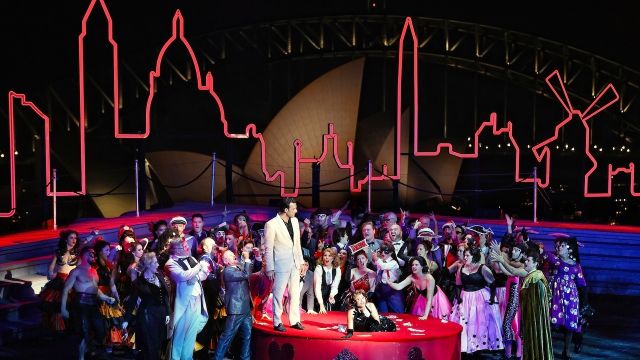 After a week of torrential rain, Sydney sparkles for the opening night of Giuseppe Verdi’s La Traviata … on the harbour! With the Opera House and the city skyline shining through a clear, balmy night, it seems impossible to believe that only three days ago the city cowered under torrential rain – and flood waters surged throughout the state.

Even as the eager audience crowds into the stunning outdoor venue that is Handa Opera on the Harbour, thousands of families are mourning the loss of their homes, their businesses, their crops, their livestock – and desperately trying to clear away the mud and debris left behind. And this after a year of anxiety and pandemic enforced restrictions - and that began just as this current production was about to open. Through the blessings of distance, sound governance and a sensible society, the restrictions of the last twelve months have been lifted … and here we are on a fine autumn night in 2021 at the opening night of the production that was put on hold a year ago.

That makes it rather special for the director Constantine Costi and his cast and crew – special and historic - because La Traviata was the very first opera to grace the iconic harbour stage in 2012. In the words of Opera Australia’s Artistic Director Lyndon Terracini: That “brilliant chandelier” is just as impressive today as it must have been in 2012. Made up of 10,000 crystals, it is 9 metres high, 9 metres wide and weighs 3.5 tonnes. Manoeuvred by crane, it hangs above a stage twice as wide as any indoor Australian stage, a stage that, though it appears to ‘float’ on the harbour, can support up to 150 tonnes. Housed beneath it is a studio where 40 musicians send the contrasting themes of ‘love and death’ in Verdi’s score echoing across the harbour.

La Traviata is based on the true story of a vibrant young Parisian courtesan, Marie Duplessis, who, despite suffering from tuberculosis, the consumptive plague-like disease that raged in Europe in the 1800s, led a short but colourfully heady life.

Duplessis is recreated by Verdi in his heroine, Violetta, whose arias are sung in this production by the remarkably talented and expressive Stacey Alleaume. Alleaume, a diminutive figure on the wide, stark, open harbour-side stage, and dwarfed by the huge chandelier above her, is nevertheless a force of nature whose energy appears unfailing. Her voice resonates dizzyingly high into the evening sky throughout the party scenes of the first two acts, then reaches plaintively across the water in the final, poignant scenes.

The duets with Rame Lahaj as her lover, Alfredo, are beautiful examples of Verdi’s talent to bring together the instruments of voice and orchestra. Lahaj, billed as one of the most prominent tenors of his generation, gives Alfredo’s love for Violetta the vocal depth and richness that offset her feverish vitality. Michael Honeyman, who plays Alfredo’s father, Giorgio, has the difficult task of convincing Violetta to give up her affair with his son for the sake of family honour. Not an easy task, even when sung to Verdi’s forceful score and librettist Francesco Maria Piave’s persuasive words.

With the equally talented voices of nine other principals, a forty strong chorus and twenty dancers, Costi’s production is a tribute to the original production – and the spirit that kept the team buoyant through a very difficult year. With Tess Schofield’s colourful costumes based in the post-war glamour of the 1950s and the creative electric imagination of lighting designer John Rayment, this ninth Handa Opera on Sydney Harbour is one that will be remembered. At a time when theatres are still ‘dark’ throughout so much of the world, the captivating notes of La Traviata ring out rebelliously in this historic production. In the words of Opera Australia Patron in Chief and Founder and Chairman of the International Foundation of Arts and Culture (IFAC):

“Though there are many challenges still to come, the long-awaited return of our artistic celebration, here in Sydney, is a beacon of hope for us all”.