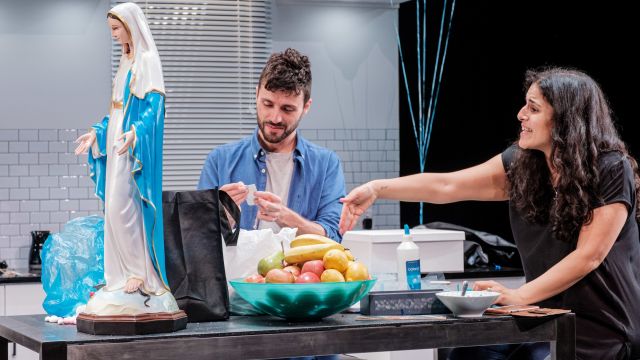 In a short, opening scene of James Elazzi’s play, Danny (Anthony Makhlouf) and Josephine (Nisrine Amine), dance as children to a tape of famed Lebanese singer and actress, Sabah. Josephine encourages Danny to “dance like Sabah” and in a “dream sequence” to the side of the stage Sabah, complete with flowing blonde hair and shimmering dress, appears briefly to him demonstrating her sinewy hip movements for him to imitate.

Cut to the present, where Josephine and Danny are at their mother’s home preparing for the christening of Josephine’s eight-month-old son. Danny has the task of sticking flowers on to place cards. Josephine has brought in a bunch of blue helium balloons and the christening robe that has cost a small fortune.

Dana (Deborah Galanos), their mother, arrives with a new statue of the Virgin Mary to replace one which Josephine’s daughter has broken, and the sugar-coated almonds for the christening. Unfortunately, they aren’t all blue, which upsets Josephine. The ensuing argument is interrupted by the arrival of their uncle, Mark (Johnny Nasser), the family peacemaker, with the christening cake, fortunately iced in blue! And, through all this, Aunty Fatima, calling from Lebanon, talks to them all via the hands-free phone on the kitchen bench. It is very funny, almost chaotic. 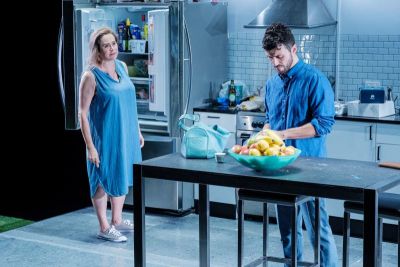 Elazzi has used that chaos, and the cultural/religious expectations of the family christening, to explore “what comes to the surface, and what is lost, when we shake up our cultural fabric” (Elazzi). In the early scenes he establishes through pacey, bilingual dialogue, the cultural mores that are so typical of a busy, Lebanese Australian family – important because Danny has deliberately set in motion something that will expose “what can happen to unconditional love when it’s pushed to the limits” (Elazzi again).

Thrown together in the chaotic setting that Elazzi has created, Makhlouf, Amine, Galanos and Nasser easily establish the intimacy of four people who are very close. They are animated, lively, noisy, emotional. They argue, defend, assist, resist. Together they create a family united by culture, heritage … and love. It’s almost as if each identifies even more intimately with their character than one would usually expect!

Dino Dimitriadis directs this production with the compassion and imagination for which he is highly respected across the Sydney theatre scene. His understanding of what Elazzi wants to say in early scenes is evident in the pace with which he controls the action. His empathy with the characters and their emotions is exemplified in more intimate directions – the passing turn of a head, transitory pauses, the evocative power of still moments of complete silence. In the final scene, he uses imaginative vision, and Benjamin Brockman’s lighting skill, to create a more spectral effect. 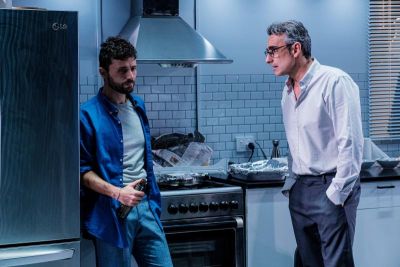 For the first scenes of Lady Tabouli, Jonathan Hindmarsh has designed the compact kitchen and al fresco area of a suburban home. A venetian blind covers the window above the bench, where the hands-free phone sits among other utensils. It’s a busy kitchen. There are covered serving dishes, a coffee maker, shopping bags, a phone. The three-door fridge is full. A bowl of fruit sits on the table, which is soon covered with the paraphernalia of preparations for the christening.

Later in the play, the cast will transform the set to become the prized, beautifully furnished ‘salon’ of the family home. This is a clever piece of set design which serves to consolidate the emotional turmoil in which the family finds itself – and the intrigue of the final scene.

Though the characters in Lady Tabouli are Lebanese Australians, the frenzied, funny, but emotionally complex family drama Elazzi has fashioned is one with which anyone can identify – because the complications that Danny introduces could happen in any family where strict customs or cultural expectations dictate the consequences of the choices individual members are forced to make.

The play is long (90 minutes with no interval), and though there are references which are specific to Lebanese culture, its appeal is broad, and its message deeply relevant.