The Last of the Red Hot Mamas 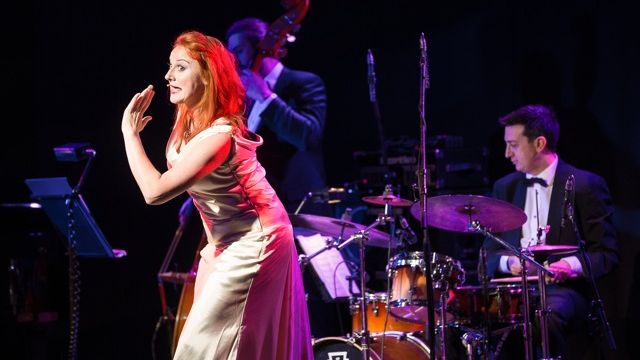 Audience members of my generation will remember 1960s black and white TV broadcasts of older, amply-proportioned American singer Sophie Tucker, whose life and career are now joyously celebrated in Marika Aubrey’s cabaret The Last of the Red Hot Mamas.

Fewer will know of her early career struggles, blacking her face with burnt cork, though maybe they’ll recall similar Black and White Minstrel variety shows which lingered on the Tivoli circuit into the 1960s, and beyond that on TV.

Sophie Tucker sizzled on the vaudeville stage in the early part of the 20th century, a risqué and outrageous trailblazer in an age when women generally portrayed their gender and sexuality far more demurely on stage. Thanks to Marika Aubrey’s ample vocal chops and terrific comic timing, Sophie now sizzles back onto our cabaret stages, backed by smokin’ three-piece jazz combo, Bev Kennedy, Jamie Castrisos and Trent Prees.

Like all the best bios, Sophie’s life supplies tales of displacement, poverty, a colourful childhood, failed marriage and early career setbacks, in a script drawing largely and colourfully on her own words.

Early in Sophie’s career, producers thought that her ample figure would put audiences off, so she was sent on as a ‘coon’ (blackface) singer in vaudeville. Remarkably, when her trunk, with her make-up in it, was stolen, Sophie was an instant hit when she emerged onstage as herself, in the pink and larger than life. Sophie’s black-face years, however, are a rich chance to wince as Marika delivers the now cringeworthy un-p.c. songs of the genre, tongue firmly in cheek.

Marika Aubrey’s cabaret goes way beyond a tribute to the performer dubbed ‘The Last of the Red Hot Mamas’ with intersecting personal and family journeys based on shared Ukranian heritage (Marika’s great-grandfather and Sophie were born in neighbouring villages in 1884, making new homes in Australia and America respectively, before dying in 1966).

Ultimately, the show-maker is Marika’s energy and her vocal versatility to deliver on a wide range of songs from a gentle, sentimental folk song, to gems from Sophie Tucker’s repertoire, including raunchy comic songs ('Nobody Loves A Fat Girl'), recognized standards ('Put Your Arms Around Me Honey' and'After You've Gone')and the blues which she famously introduced into white vaudeville. With broad, risque comic timing and delivery, she nails the wealth of Sophie Tucker quips and anecdotes with which the script is peppered with a real ring of truth.

Woven engagingly through the show are stories of Marika’s own family, and her three visits to Ukraine, flavoured with a more personal and reflective style.

Probably planned as a cabaret around tables, a rethink on audience entrances and interactions might be in order for theatre seasons, simply because some of us missed a few great moments of audience interaction.

A vibrant first show from an accompllished cabaret performer to launch the Hayes Theatre Company’s Cabaret in Residence series.