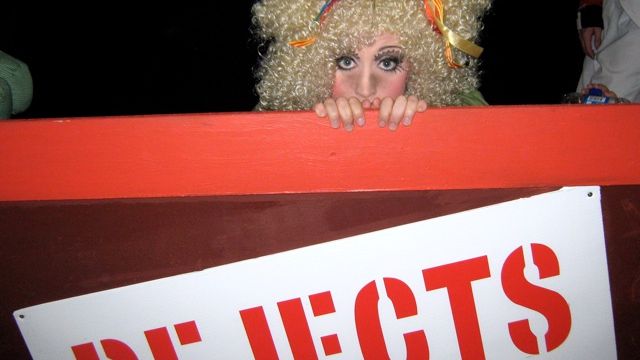 *R U Hmlt* (A work in progress)
Mercury’s Wings Theatre Co. Kirra Hill, Gold Coast. Director: Claudine Stephen-Smith
This “work in progress” is the result of the collaboration of husband and wife team James Anderson and NIDA trained Claudine Stephen-Smith. Having previously worked on the Shakespeare play, they decided to revisit the piece and present their slant on the story: comparing the life of Hamlet with that of a modern day son.
The venue for this preview was Kirra Hill; under a splendidly shady old tree overlooking Kirra and Coolangatta beaches and blessed with a gentle breeze to accompany the Olde Bard’s tale.
James (who works with Franks Theatre in Brisbane) used the performance space to advantage, assisted by a guitar, a wheelbarrow and an unsuspecting orange which was “a-peeling” as Yorrick’s skull. He skilfully held the audience’s attention for 45 minutes (a monumental task considering the surrounding scenery).
The small but enthusiastic audience appreciated the afternoon’s entertainment, and were asked for feedback to assist in fine tuning the script.
Mercury’s Wings is a fairly new theatre company only several years old but gathering quite a following on the Coast. They intend to tour the production once they are happy with the entire show.
Roger McKenzie

Mr Cellini’s Secret (World Premiere)
Spotlight Theatre, Benowa, Gold Coast (Qld). Director/ Creator: Kate Tardy
Mr Cellini’s Secret is the latest children’s show written and directed by Spotlight Theatre stalwart Kate Tardy, and each offering is bigger and better than the one before. Collaborating with her talented daughter Ashley, as co-director, choreographer and performer, Kate has discovered the knack of presenting a well constructed story-line that entertains kids of all ages; enhanced by the use of theatre techniques, colourful and fanciful costumes and scenery, interwoven with just enough musical items to keep everyone’s attention.
Mr Cellini is a toy maker who has a secret paint he uses on his dolls that makes them come to life. He trains the dolls to steal and then sells them to wealthy families. Under the cover of darkness he visits each doll and instructs them to steal from their new owner’s family.
His ‘Secret’ is discovered by his rejected projects that congregate each evening in his absence. The “Rejects” take matters into their own hands and convince the local policeman to pay Mr Cellini a visit where they expose their creator for the thief that he has become.
The cast of Isaac Moody, Mr Cellini; Jess Sheppard, Cabbage; Ashley Tardy, Floppy; Kieton Beilby, Jack; Kate Burnham, Sybil; Jam Marshall, Victoria and Jack Wood, Zero (the hero) were well rehearsed and complimented each other’s characterisations. The two clowns were very entertaining along with the chorus of dolls and the dutiful Policeman.
Once again, Spotlight’s hard working personnel on both sides of the curtain contributed to the success of this wonderful piece of Children’s Theatre.
Roger McKenzie.

Aladdin Jnr
Ballina Players Theatre (NSW). Director: Mike Sheehan
IT is an old saying but one the theatre still lives by - “The Show Must Go On” - and go on it did. Just one hour before curtain up Vincenza Ciccia, who was to play Lago, withdrew due to illness. The part was taken over by one of the narrators, who knew the show so well that she needn’t have taken the script on stage. As for the stage, it was rather stark, relying on lighting to create atmosphere and mood. It is not easy to direct a large cast on a small stage but Mike Sheehan seemed to do this with ease and the effect was one of a stage filled with colour and movement.
All the cast worked well together, enjoying their roles. Lachlan Copeland was a very convincing Aladdin, with just the right amount of street wise humor and bravado to make him the perfect street rat. Add a rich singing voice to the list, and you have a very talented young man we’ll be seeing a lot of in the future.
Both Sasha Giles (Jasmine) and Jenny Briguglio (Genie) stood out in their roles. Aladdin Jnr runs just an hour, making it perfect for the young audience. The company should be congratulated on a very enjoyable, as I saw only smiling faces.
Natalie Trengove