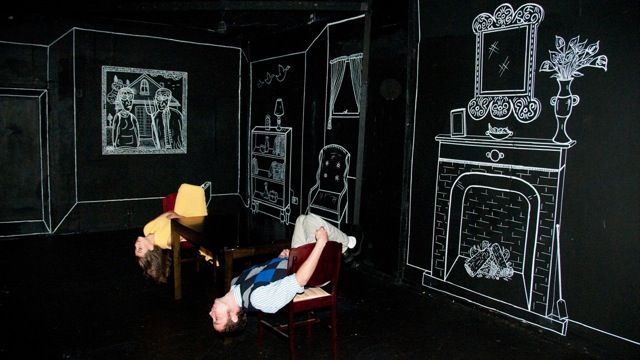 This piece opens with a couple sitting upside-down on chairs at the dinner table. Perhaps this is what the through-line is, that this couple see things from a warped perspective or they’re so bored and uninventive in their lives and their marriage that they’ve gone topsy-turvy.
The script by writer/director Sam Basger showed promise with some terrific one-liners and innovative ideas, but I wondered what the objective was. It didn’t seem to be driving us anywhere.
The work centers on a middle-class conservative, un-pc, caricatured couple who live in a bubble. They seem obsessed with their table and have an emotional tug-of-war going on with each other. They strangely chatter away and then after awhile hold long alienating pauses. At other times they break into fights where they yell and snarl at each other. The piece then returns to them upside down on chairs again, so we feel this repetitious circular element within the marriage.
The third character, Carl, is an ‘events manager.’ This role has the capacity to be very funny and quirky however this actor, along with the other two actors, seems conscious of themselves within the roles. There’s a sense that if only they had had longer to develop the characters they could have carved out more depth and strength within the portrayals to play the parts more convincingly.
The writing in this play is fairly clever and has some definite comedic highlights. I’m excited to see more of this playwright’s work in the future.
The set by Justin Feuerring was very fitting for this production and worked refreshingly well within the realms of this space at the TAP Gallery. Feuerring’s design is a simple, clean chalked mural which creates the married couple’s lounge room, with a bookshelf, a fireplace and portrait of a couple, one with a pitchfork, perhaps sub-textually displaying the hidden agenda of this couple.
I left the theatre with many questions about this work. I felt it was still in ‘workshopping’ stage. We could have been a good ‘test’ audience.
I commend this new work. The writing has potential but it was a fairly confusing, frown-inducing 50 minutes of theatre.
Emma Bell