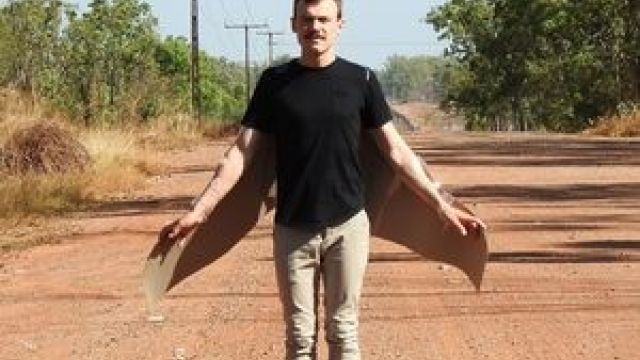 Tremayne Gordon is Andrew, a young man with a briefcase, newly moved out of home and into a shared house, making some bad choices about the snooze button, unknown cocktails and the Ancient Greeks.

In forty minutes, the small audience is enthralled in Andrew’s rocky navigation through his first day of independent living – and he engages us too, unafraid to involve us in his tale. Gordon is likeable, genuinely funny and convincing in his portrayal of someone still trying to work out who he is. Daniel Dosek is his “tech” but as well as doing a good job of lighting and sound, he’s the performer’s sidekick – a good foil to Gordon’s straight-faced comedy.

It’s philosophical and sophisticated; its pacing is great; the delivery is dramatic – sometimes poetic; and it just seems perfectly natural for the story to wander from one disaster to the next. Gordon is convincing in his conversations with a potential boss, a bouncer and a briefcase – as much as he is with people at a party or a neighbourhood owl. He mixes Greek myth and Latin mottos into a day wearing a suit – and it works.

This is a dramatic monologue, not a stand-up show, and it deserves a bigger and better audience – once again, another talented performer is the victim of an over-saturated and over-priced Fringe.