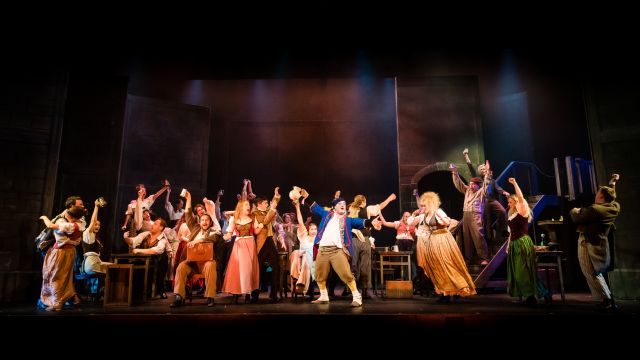 This is a brilliant production! The standing ovation it received on opening night was thoroughly deserved. The direction is brilliant. The voices are superb. The action is dramatic. It is everything a production of Les Misérables should be – and what one expects of a Packemin production. The fact that the season is almost sold out is indicative of the esteem in which the company is held by its western Sydney audiences.

Victor Hugo’s story of the luckless Jean Valjean, condemned to hard labour for stealing bread for his sister’s starving family, and his journey from prison to redemption pursued by his nemesis, Javert, has been immortalised in this musical theatre drama. This production does it proud. Lit by a high spot above the orchestra pit, musical director Peter Hayward leads his musicians in those first unforgettable notes of Claude-Michel Schönberg’s stirring introduction. The curtain rises on a hazy stage where ropes hanging from high above are pulled by the hapless prisoners below. Light diffuses through the haze as guards pace menacingly.

Luke Joslin directs the production with impeccable attention to the timing and pace set by the music – yet still manages to ensure the cast finds the complex dimensions of the characters that are evoked by the lyrics.

Daniel Belle brings Jean Valjean to life once again in a stunning performance that finds all the power of the music as well as the growth in strength and character of the man in the seventeen years over which the story occurs. From aggrieved prisoner he emerges as redeemed factory owner, caring adoptive father and forgiving opponent. His flawless performance of ‘Bring Him Home’ pulled every heart string. His duets, whether with Javert or Fantine or Cosette, demonstrate the experience and talent of this very popular Australian tenor.

Robert McDougall brings similar conviction and power to the role of Javert. He finds the unwavering conceit of the man in a compelling performance that leads to his confused reaction to Valjean’s mercy and the agonising notes of his final ‘Soliloquy’.

Fantine is played with pitying poignancy by Matilda Moran, and Georgia Burley brings hope and a little joy to the production in the role of Cosette. The wistful character of Eponine is played by Emma Mylott, whose understated performance finds the touching melancholy of the role.

Brenton Bell is Marius in his first performance with Packemin. He finds the complex emotions of this role – his love for Cosette, his brotherly affection for Eponine, his idealistic politics – in songs that move from gentle caring to rousing rebellion. That rebellion is epitomised by Noah Rayner in an impressive depiction of Enjolras, the student who leads his followers to The Barricade. Raynor’s expressive face and contained sense of rage and injustice brings believable passion to this role.

The humour of Les Misérables is found in the characters of the ruthless, bawdy Thénardiers, the innkeepers who have ‘cared for’ Cosette. Alex Cape and Prudence Holloway give these characters the energy and oomph that lift the ‘spirit’ of the story whilst still depicting the seedy under-class of nineteenth century France, where poverty and greed thrived. They are particularly captivating as they celebrate surviving yet again in their song and dance routine to ‘Beggars at the Feast’.

These performers are supported by a very talented and committed ensemble who depict the many French characters that Hugo built into his novel. Valjean’s fellow prisoners who “look down” because they know “sweet Jesus doesn’t care”; his factory workers who know that “the end of the day” will bring no change; the low life of Montreuil-sur-Mer who torment Fantine in ‘Lovely Ladies’; and the people of Paris who ‘hear the people sing’. They are a formidable chorus who act just as effectively as they sing.

The whole production is a credit to producer Neil Gooding and the combined flair of Joslin, Haywood, associate director Courtney Cassar, choreographer Madison Lee and associate musical director Rachel Kelly. It is a rousing, yet emotive production that will echo in the memory of its audiences for more than ‘One Day More’.

There are still some seats in the circle and gallery left, but they too are selling fast!