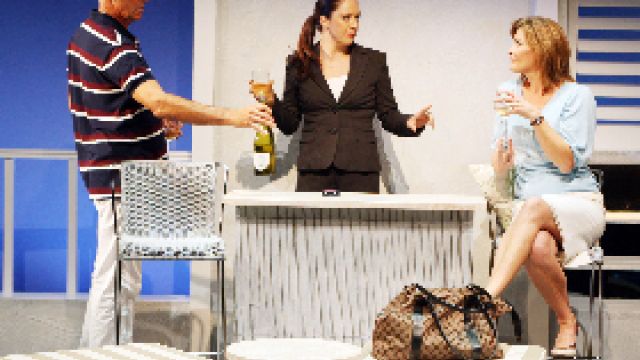 Two Noosa couples mix socially without much liking each other.
The men, a radical film-maker exiled to Noosa after a discredited documentary, and a white sandshoe developer - the women, old school acquaintances, a year apart at school, at odds thanks to book club politics.
Add their apparently incompatible 30-something off-spring, struggling muso and hard-nosed rising corporate lawyer and mix the gene pool.
There’s a touch of Romeo and Juliet (in this case Rick and Emma) about David Williamson’s new play. No sword fights, though, and it ends happily enough, though perhaps a little too neatly.
Not the oft-yearned-for biting early Williamson satire of The Removalists, Don’s Party or The Club – Let The Sunshine is the continuation of the commercial domestic / social comedy genre David Williamson has been simply entertaining audiences with over recent years. David Williamson’s acute observation of human behavior makes comedies of this sort audience-pleasers, with regular glimmers, and the accompanying laughter, of character or situation recognition.
Director Sandra Bates and her cast ensure a slick, lively representation - William Zappa, the depressive documentary maker, Georgie Parker, spirited, yet long-suffering as his wife, Andrew McFarlane, the unapologetic, testosterone driven developer, and Kate Raison, quietly in control as his wife.
Their off-spring; sharp-tongued Emma (Emma Jackson), initially a vulture of a corporate lawyer, and struggling musician / pub glass collector Rick (Justin Stewart Cotta), seem an unlikely pair at first, but there is chemistry both in the characters and the performances. Early on, the strident, unremitting Emma is convincingly dreadful - when she sheds parental and career expectations for motherhood, she becomes the play’s most engaging character - convincing and sympathetic. Justin Stewart Cotta is credible and believable as Rick.
Cinematic writing, short scenes which seem to cross-fade, effectively uses Graham Maclean’s single setting for all the play’s locations across the twin locations of Noosa and Sydney.
Lots of human truths, Williamson wit if not bite, and perhaps a little too conveniently tied up. Still, diverting, easily digested entertainment.
Neil Litchfield