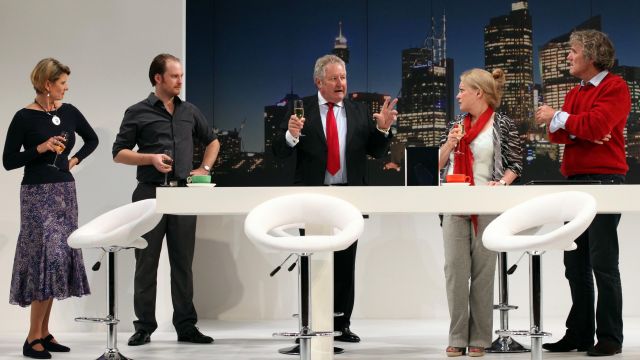 For a semi-retired writer Williamson is still in fine form. In fact he’s come full circle. The spine of his first big success, Don’s Party was labor/liberal divisions; here we are forty years on, this time examining how political attitudes are changing, especially with the X generation.
The result is a delightfully provocative comedy that literally brought the house down. Melbourne audiences can look forward to this one: plenty of fodder to chew over afterwards at coffee.
This is today’s play, literally. It will become a social milestone for the late Noughties: IKEA furniture assembly frustrations; the economic collapse; book clubs; seachanges; rampant development; population and infrastructure problems; climate change; ethnic intolerances; the dog-eat-dog nature of big companies, grandparents’ visiting rights … think of any bitch you have with today’s world and you’re likely to find it referenced here. Therein lies the comedy: the shock of recognition.
John Wood as the curmudgeonly developer, Ron, revels in his blind conservatism and inflexible attitudes. Andrea Moor, as bitterly acid as she can be saccharine, is Natasha, his surgically-adjusted glamorous wife. Robert Coleby’s late 60’s left-wing ideologue, Toby, misses his ‘arty’ Sydney crowd while his wife Ros (Jacki Weaver) misses the bookclub VIPs. Still unsuccessful song-writer son of the left-wingers, Rick, is philosophically opposed to Emma, the fabulously successful corporate lawyer and daughter of the rabid right-wingers.
You can imagine the inevitable social collisions when this lot get together in Noosa. But Noosa doesn’t take all the flak; Sydney and Melbourne need to duck for cover too. Most interesting are the social reversals of the younger generation when real life impinges on lifestyle.
This is a must-see show!
Jay McKee

Comparisons can be odious in theatre, especially when one of Australia’s most successful playwrights, Michael Gow, directs a new work from the most successful Australian playwright ever - David Williamson.
In this QTC/MTC co-production, Jacki Weaver and Robert Coleby play ageing Sydney radicals, Toby and Ros, who flee north to Noosa to escape a major media scandal.
They soon meet brash multi-millionaire property developer Ron (John Wood) and his wife Natasha, the ‘Queen Bee of Noosa’ - played to the hilt by Andrea Moor.
We soon discover that you can take the girl out of Sydney, but you can’t take Sydney out the girl; and the two rival social couples take great delight in baiting each other at every turn, with hilarious results.
Williamson returns to his commercial roots with a winning formula that helped make hits out of Money & Friends and Emerald City.
At times directorially the actors seemed to be left to their own natural instincts and experience to garner the bulk of the laughs contained in the piece. Rachel Gordon gives an outstanding performance, as she dramatically changes from high powered, could-be-lesbian, corporate lawyer to a sedate housebound mother desperately trying to take care of her first born child.
Robert Kemp’s stark white pristine set design enhances the production and gives the audience an insight into how the other might live.
There are several highs throughout the production, but ultimately it is let down at the end when the script, and storyline, seem to just fizzle out. But this minor flaw won’t stand in the way of the play being a commercial success.
Paul Dellit