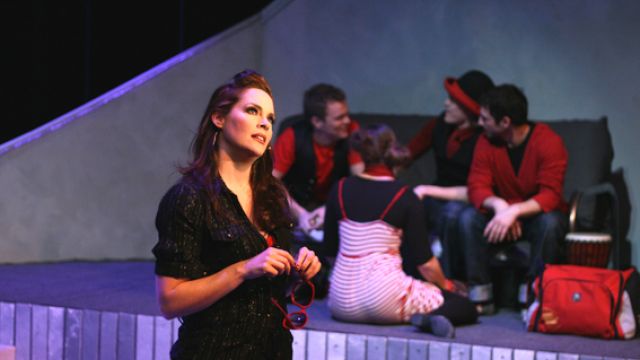 The alluring, hypnotic and contradictory world of ‘Circus’ has been excavated many times throughout the Music Theatre canon: Barnum, Carnival! … and the great grand-daddy of them all, Rodgers and Hammerstein’s Carousel – spring to mind. Cinema, too, has mined the artform’s layers of emotional, death-defying performance excess to (mostly) memorable effect. Unlike its siblings, where the themes and the environment from which they emerge meld quite magically, the multiple ‘Circus’ analogies and metaphors throughout Life’s a Circus provide it with, almost equally and at once, great service and disservice. And it is a structural fracture that never heals.

Life’s a Circus tells the story of the traveling Grand Illusion Circus troupe, and in particular, three of its members: Vivien (Plumley) and David (Hogstrom) who are best friends and partners in the tightrope-walking act, and Alex (MacDonald), the Clown. With increasing urgency and desperation, Vivien and David make various plays for the affections of the young Alex – who, in a bitter sweet denouement, flawlessly delivered by a red-hot Mr MacDonald – declares that neither of them offer him anything more desirable than the joys of his journey through life as a Circus Clown. Problematically for the overall effectiveness of Life’s a Circus, it’s not that difficult to see why. MacDonald’s ‘Alex’ is a lovable, joyful character – and MacDonald connects truthfully with the abandon and sensitivity of the role of Clown … not only in the way he chooses to journey through life, but also in the snippets we witnessed of his exquisite clowning skills. That Vivien and David’s lives, in stark contrast, contain such little real joy (Vivien shops and David cruises for sex online), is a measure of the only credible way in which the Circus environment contributes meaningfully to the story’s primary arc.

The three principals are, without exception, superb. Their reading of, and obvious respect for, Mr Costanzo’s big-hearted and harmonious score is spot-on. They are more than ably supported by the production’s gold-plated pedigree, including Music Supervision by Wicked Musical Director Kellie Dickerson; a stylish, functional and fantastically versatile set from Christina Logan-Bell; exquisite lighting design from Lucy Birkinshaw and an illuminative soundscape from Lo Ricco Sound Studios.

Director Kris Stewart’s otherwise compact, super-charged and tightly-packaged direction couldn’t quite join the seams that connect the trio of principals and the four circus performers (McGurgan, Carberry, Curtis and Williams). More often than not (with the exception of the clever Walking the Tightrope), their ‘voicelessness’ (particularly in the opening number) began – and ended – as a dislocated and unsatisfying distraction … unlike their skillful, acrobatic artistry – which was simply breath-taking. Frustratingly, they seemed to belong in a completely different show.

The essential structural conflict is that Mr Costanzo’s score is vastly more accomplished and often superior to his chosen construct – and it really comes into its own when it discards the increasingly literal, and ultimately repetitive, ‘Circus’ metaphors and instead embraces the landscape of interpersonal relationships, as he does to devastating effect with The Olive Tree, Midnight, the Sondheim-esque Something on the side, the show’s haunting (but sadly, later abandoned) motif Time will tell, and the showstopping ‘11 o’clock number’ Fly Away.

It’s an extraordinary thing when a Music Theatre performer quite literally ‘stops the show’. Aficionados of the form crave ‘showstoppers’ – that moment when the massive emotional and musical machine that is a piece of Music Theatre turns on the head of a pin – stopped in its tracks by the absolute perfect performance of the perfect song at the absolute right time and place of the night: which is precisely what Chelsea Plumley did at this Opening Night performance with the ‘anthem’ of the show: Fly Away. Why Miss Plumley is not a major star on our Music Theatre stages remains an unqualifiable mystery.

Ultimately, however, Magnormos, under the Artistic Direction of Aaron Joyner, are to be celebrated, treasured and prized for their work in Australian Music Theatre. The privilege of being present at this rare and special performance of a piece that, with more work and development, should shed its skin to become a serious contender for that constantly elusive creation: The Australian Musical.

Pictured: Chelsea Plumley as Vivien in Life’s A Circus