Lights in the Park 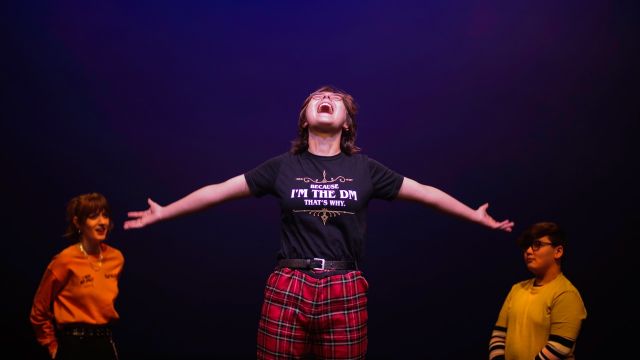 An ensemble production takes on a whole new meaning when it involves thirteen teenagers from different suburbs and different schools rehearsing after school and in school holidays. It requires a ‘duty of care’ and understanding far beyond that of ordinary directorial responsibilities. And it demands a discerning choice of material, meticulous organisation and thoughtful preparation.

Obviously, director Lucy Clements is ‘on top’ of all this! She and her crew – Sacha Slip, Sorie Bangura and Kate Wooden – with the backing of the ATYP production team, have approached this production with the sort of professionalism that nurtures their young cast as well as giving them a genuine insight into the discipline and integrity that defines the arts. Alexander Lee-Rekers’ very carefully crafted play, which was supposed to open at this time last year, has waited patiently in the wings for the pandemic restrictions to be lifted, and this production is a fine tribute to ATYP’s ongoing commitment to providing practical theatrical experiences for aspiring young performers and playwrights.

In Lights in the Park, Lee-Rekers has created a play that extols the honest perceptiveness of young people – and their ability to deal intelligently and intellectually with problems. He calls the play a “celebration of young people, showing them supporting one another and building communities”. In doing so he also shows their ability to face “a frightening and uncertain future with courage”. The characters he has created are carefully drawn, their strengths and frailties portrayed in dialogue that is artfully appropriate and prudently economic. They are characters that Lucy Clements has introduced skilfully to her young cast. It is obvious that they have worked sensitively through the play together, deliberating over relationships and developing an understanding of the events that have shaped them.

Each performer brings that understanding to their characterisation, finding with Clements’ caring direction, the different dimensions that Lee-Rekers has infused into their lines. Together they introduce the audience to a group of characters who have faced a series of problems – and who go about finding solutions that show tolerance and compassion … and maturity. There’s the aspiring singer who throws ridicule to the wind and records a song that gets unexpected air play, and her ally who supports her through the resulting scorn. There’s the almost hidden pathos of a young man who mourns the death of his first love, and the friend who listens and consoles. There’s the older sister who has made some unfortunate mistakes, and her young brother who is trying to hold the family together. There are the enthusiastic “entrepreneurs”, eternally optimistic about ways they can make a profit. There’s an aggressor who seeks revenge for wrongs inflicted by the school bully – and the friends who attempt to dissuade. There’s the bully himself who uses bravado and cash to cover his lack of self-esteem. Moving quietly among them is the gentle observer, who watches, and cares … Together, at a party in a park during a power outage, these characters are deftly portrayed by thirteen very talented and committed young actors. Their empathy with the characters is strong, their skill in revealing the relationships testament to Lucy Clements’ wise guidance and judicious direction. There are some lovely moments of humour, some carefully directed moments of anger – and a gently directed moment of despair. There are, too, some cleverly effective directorial decisions. All are enhanced by an imaginative design team including Liv Hutley, Benjamin Turner and Chrysoulla Markouli.

ATYP’s commitment to young people and their developing love of theatre reaches right across the wide expanse of this big city, bringing opportunities to be part of theatre – and to see theatre. That commitment is reflected in this very professional production – and the obvious passion and zeal of its young cast.