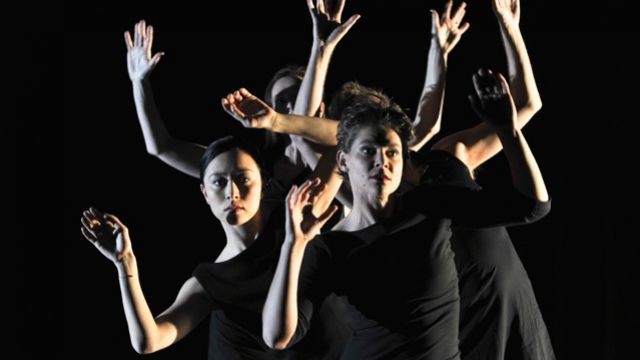 In this suite of solo performances, Martin del Amo’s contribution to Dance Bites 2013 brings together four pieces for which, over the past two years, the Little Black Dress was the recurring costume.

In each piece, the iconic costume is taken out of its usual glamorous context into choreography that is ultra contemporary, highly interpretative and tightly controlled.

In the first of these, Quest, performed to an eerie composition by Alex Pozniak, light reveals Miranda Wheen, in Little Black Dress and patent stilettos. The music soars above her as she stands. Gradually her shoulders hunch, and as gradually relax. Her right hand moves just as gradually. This sets the tone for the choreography. Gradual movements become a little more fluid but take her to precarious positions, almost at times like a robotic mannequin that has been badly programmed. Her eyes add to this illusion, staring ahead. When she loses her shoes, tight control is replaced with confusion until she finds them, replaces them – and regains her enforced composure.

Del Amo himself performs the second piece to music by Gail Priest. In another Little Black Dress and laced boots, he stands, still, spot lit at the back of the stage. For the first few minutes, only his hands and arms move, almost as if reaching out to catch the notes of the music. As the music changes, he turns, arches, gradually brings his whole body into the stretched, controlled choreography, and begins to move around the stage. Once again, the choreography is tight, the movements fluid and the narrative clear.

In the third piece, Dame Kiri Te Kanawa sings Mozart’s Ruhe Sanft, as Kristina Chan is revealed. Her soulful eyes gaze, but one is unsure what she sees. There is hurt somewhere, one supposes, as she slowly twists herself into awkward positions, reaching sometimes, moving sometimes, but never really seeming to be able to break away from whatever it is that has her in its control.

In A Certain Slant of Light, Sue Healey, in the inevitable LBD, fish nets and heavy laced boots, performs to Fur Alina by Arvo Part. This a more fluid piece, slightly faster and attuned to light as well as sound. Here the choreography seems almost to control the sound. She moves in the silence between notes, and the music follows her to different areas of light, which seem to dictate a different state, a different mood and thus different movement.

Finally, all four perform together in a short piece choreographed to ABBA’s Like an Angel Passing Through My Room. As their arms rise and fall, almost intertwine, then disconnect, they move slowly and smoothly across the back of the stage and eventually disappear!

This is a very interesting collection of del Amo’s work, performed by very skillful dancers, whose control and sensitivity find the essence of his choreographic story telling.