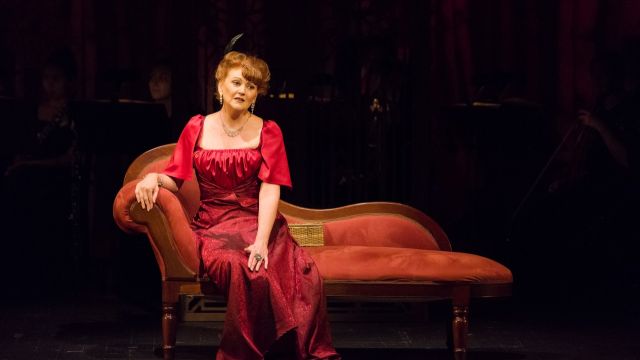 Composer and Lyricist Stephen Sondheim’s enchanting musical A Little Night Music was first performed in 1973 and although many feminists would balk at some of its lyrical content, it has lost none of its charm. With a book by Hugh Wheeler, and inspired by the Ingmar Bergman film Smiles of a Summer Night, it is easy to see why it continues to be performed the world over.

Set design by Pam O’Grady and Tim de Jong is simple, but with its elegant set pieces and thoughtful lighting, it is aesthetically pleasing. The incredibly talented orchestra, led by musical director Christine Hodgen, are a welcome addition to the upstage performing space.

This musical is a wicked tale of love between current and former lovers and is set at the turn of last century in Sweden. It is as funny as it is tragic. Lawyer Fredrik Egerman has recently married a young virgin, Anne, whom his son, Henrik, also adores. Fredrik’s dedication to his blushing bride is tested when he reunites with a former flame, actress Desiree Armfeldt. Things grow more complicated when her jealous (and married) lover Count Carl-Magnus Malcolm gets wind of the reunion. The coupling and uncoupling comes to a head when Desiree convinces her mother to host Fredrik and his family for a weekend on her lavish country estate-and the Count, with wife in tow, crashes the party. The G & S Society’s production is as good as any professional production I have seen. Polished performances and tight direction, choreography and staging give the gifted cast room to shine. Adding to the spectacle are the beautiful costumes by Helen Snoswell.

As fading actress Desiree, Bronwyn James is sublime. Her understanding of the text and lyrics mean her wickedness and humour rises to the top in every scene. Her rendition of the hit standard ‘Send in the Clowns’ is truly heartbreaking and a show-stopper.

A lovely chemistry with Desiree’s leading man Fredrik, played by Robin Schmelzkopf, is a credit to director Pam O’Grady’s casting. The same could be said for the whole ensemble, who are all well-suited to their roles.

Veteran actress Norma Knight is divine as Madame Armfeldt, her imposing presence never more noticeable than at dinner in Act Two. Anne Egerman is portrayed with naïve charm by Emilene Whitehead. Development of an unlikely friendship with Countess Charlotte Malcolm, played achingly by Deborah Caddy, produces the sad duet ‘Every Day a Little Death’ and is a musical highlight. Nicholas Bishop’s performance as Count Carl-Magnus Malcolm is imposing, but he also adds comedy into his portrayal. The youngest member of the cast, Henny Walters, is a star in the making as Desiree’s daughter Fredrika.

I found it hard to find fault with this show. Experienced directors O’Grady and well-known theatre talent Richard Trevaskis understand their genre and have trusted their cast to convey the silliness of the story with tongue-in-cheek humour.

Sondheim once said that his lyrics “fade on the page but shine on the stage when set to music”. Nothing could be truer!