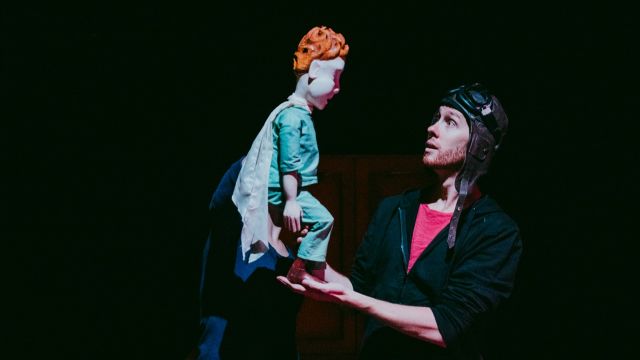 It may seem a little strange to be reviewing a show that doesn’t open until January 13, but the media showing of The Little Prince comes after its very successful schools season, and the show will open to the public in mid-January. This beautiful revival from SPPT’s vaults is very moving, and a wonderful exploration of what is really important in life.

The timeless themes of this show resonate now as much as they did, when the book was published in 1943, but there is a nod to the past, with lead puppet, the Little Prince of the title, looking not only as if he was lifted straight from the pages of the book, but also as if he could be a puppet of the time - in a gorgeous choice by designer Jirka Smitko.

Smitko’s set design is also superb. The show begins with a very bare stage, populated only with a very large crate. As the crate is unpacked, so are our imaginations and our hearts, as the performers create the world of The Little Prince. Karen Cook’s lighting design is a huge part of the show, with wonderful star-scapes, with Lee Buddle’s composition helping to steer our emotions.

Simon Clarke’s adaptation, and Michael Barlow’s leadership of a strong team, recreate the magic of the source material and this is a show that will mesmerise audiences of all ages.