Living Together by Alan Ayckbourn 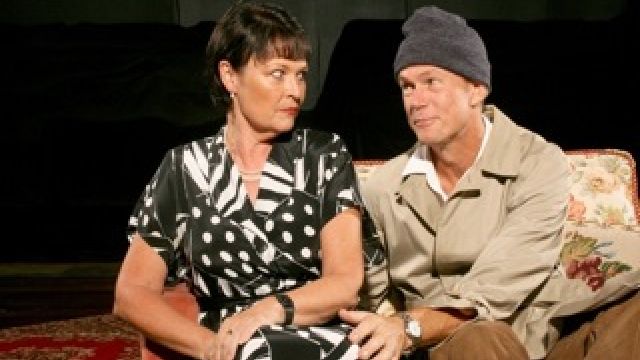 Living Together is one of the trilogy, The Norman Conquests, three plays that cover a traumatic family weekend in a Victorian country house from the vantage point of three different areas: dining room, living room and garden. Living Together covers the action that takes place in the living room.
The central character is Norman, a disheveled librarian, who is married to Ruth but fancies his sisters-in-law, Annie and Sarah. Annie, in turn, is being courted by Tom, a dim vet, while Sarah is frustrated with her marriage to the boring Reg.
Cath Willacy was outstanding as Sarah in her domination of Reg and her temptation to flirt with the irritating Norman, played convincingly by Robert de Rooy. Wayne Rees as Reg used his comedy talent and timing to perfection, while Carey Leahy as Ruth was very strong and comfortable in her role. Amanada Vaccaneo was a suitably frustrated Annie and Jim McCabe played a very dim Tom.
The outstanding scenes are the board game scene, in which Reg forces the rest of the family to sit around the table and play his latest self-invented game, and the scene where Norman seduces his wife, Ruth, on a very rough carpet.
Living Together is possibly not the best of the Norman Conquest plays, but, in this case, was well performed by a convincing cast.
Ken Cotterill