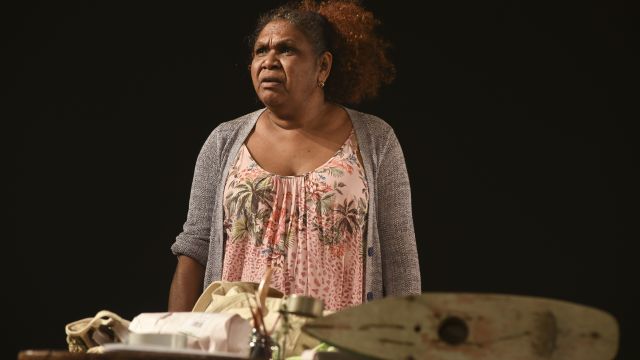 This first play by Aboriginal writer H Lawrence Sumner has been given the full Sydney Theatre Company works by star director Neil Armfield – including scenic magic and brilliant on-stage musicianship. The crème of Sydney theatregoers stood and cheered him, surely a life-changing moment.

Sumner’s play, described by his director as ‘a great poem telling our history in a new way’, is based of real cases of Aboriginal remains being repatriated from museums and universities overseas. When Simone Tucker (Jada Alberts) returns from a couple of years in Mexico and England with PhD proof of the ‘stolen remains’ of her great-grandfather, King Tulla, her father Jeremiah (Wayne Blair) seems totally disinterested.

Aboriginal woman Aunt Lizzie (Ningali Lawford-Wolf) asks her: ‘Do you know what it’s like to have your dream turn into a nightmare?’ Truth and reconciliation? No, it’s ‘reconciliation without the truth’.

As Simone, helped by the local Pastor (Justin Smith), plans the greeting and acceptance of the bones with absolutely no help from her father, we meet the 102-year-old white wife of King Tulla, Gladys Dawson (Melissa Jaffer). Ingeniously moving in and out of the story, alive or dead, she is most affecting. Wayne Blair captures the exact despair of the story. As an Aboriginal man, how many times must he accept apologies for past indignities? He stomps and swears virtually throughout. ‘We haven’t done right by the dead,’ says Aunt Lizzie.

Conventions are overturned at the beginning of the second act when Nicholas Brown as Simone’s friend Mandeep sends an internet account of the use of the collected bones. He chats to the audience as if they were in his class. ‘Hurry up, move along,’ he tells latecomers back from the interval.

Musically, the play is in the sure hands of William Barton. From his position downstage-left, he sings and plays beautifully — a didjeridu features prominently among his instruments. Designer Jacob Nash delivers a brilliant theatrical account of South Australia’s coastal Coorong region where the principal action is set.

At curtain call Wayne Blair leaped from the stage and delivered the playwright from the back of the audience to accept the general cheers of the crowd. He looked stunned.