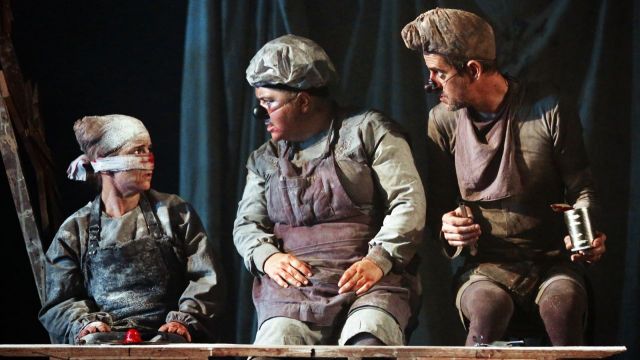 Physical theatre is a curious art form – speaking to you for reasons you can’t always specify, evoking feelings, emotions and experiences through movement and images on stage. The best physical theatre speaks to you, somehow reflecting life and its pleasures, disappointments and tragedies.

The black comedy The Long Pigs fails to achieve this. Performed by We3, a trio of Australian circus artists, the show is part of the 2015 Sydney Festival after a season in Melbourne last year. We3 reference Samuel Beckett and George Orwell but, while this work deals in similar realms of dark humour and the cruelty humans show each other, it doesn’t say nearly as much.

Three black-nosed clowns, who are much more evil than funny, perform a ritual with a bucket of red noses, presumably taken from their colleagues, who are not laughing anymore. But one nose is missing and it’s after this that the three performers turn on each other and sometimes the audience.

The performances (by Clare Bartholomew, Derek Ives-Plunkett and Nicci Wilks) are exceptionally timed and astute but feel distant. The audience loves the interactions when they’re offered - but there just aren’t enough connections through the work itself.

Part of the problem here is probably the venue, which unfortunately the three performers aren’t able to fill. The Everest Theatre at the Seymour Centre is huge – and this reviewer was in the middle of the middle. The work would be more powerful if it was more intimate.

But more significantly, the repetition of rituals or displays of cruelty here don’t connect in that visceral, unexplained way that physical theatre often does. The images aren’t beautiful enough, characters aren’t developed enough or the theatrical movement daring enough for the audience to care.

The Long Pigs is technically accomplished, cleverly performed and beautifully designed. But theatre should be more.